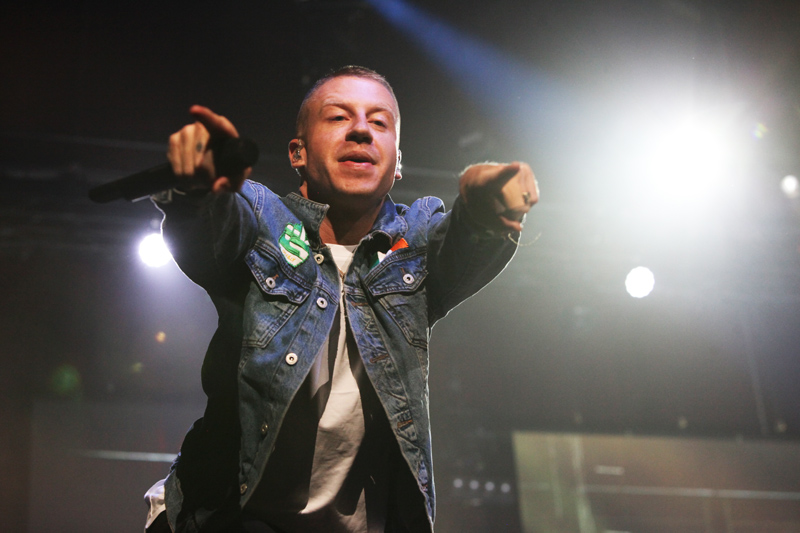 It is Saturday night in Sydney and the Grammy award winning talent of Macklemore & Ryan Lewis will be performing for us at Qudos Bank Arena on this their 2016 Australian tour this time in support of their latest album This Unruly Mess i made. Homebush is hardly downtown but over 10 000 of us were headed that way to raise the roof and looking at out across the crowd i don’t think any body had obtained their outfit by way of a thrift shop.

Opening track for the night is Light Tunnels, the duo hit the stage and Macklemore’s energy is boundless, the stage back ground is a massive video screen which provides the images to Macklamores words as he raps them out. The song ends to a roaring applause as he address the crowd for the first time, Macklemore speaks about the show being the greatest show on the earth, like a circus but it is the fans that make magic happen and you can’t do that especially if you are sitting down, so on our feet we all get. I have seen a lot of shows when the artists says on your feet we stand but a song later we sit but not tonight the crowd stood cheered and bounced all night all of us in the arena from the floor to the top seats absolutely amazing.

Macklemore is a true talent on the mic but not just when he raps but also when he speaks at one point he has all captivated hanging on his every word as he tells a tale of almost not being allowed into Australia and being detained only to find out there is a problem with one of his family members it was his Cousin Brad Pitt, Awh yea !

Musically everything is sounding shit hot and tight, helping out Ryan on sound duties is a trumpet/ guitar player backing up Macklemore was a rapper and busting out some shit hot dance moves were the back up dance crew who had some of the sickest moves in town. Not only would the massive video back drop and dance crew provide some spectacular visuals but the stage would become prop filled like on Thrift Shop racks upon racks of clothes were bought out and on Lets Eat there was a dining table setting but at the end of that track I had witnessed something you just had to be there to believe. After handing out donuts to the front crowd Macklemore holds on to one, pointing to a member of the crowd who is over halfway across the arena floor he makes the bold statement that if this man can catch this donut he will move to Sydney Australia and guess what ? He caught it so Australia your welcome, thanks to the amazing efforts of one awesome man in a beige shirt we now get a new neighbour named Macklemore.

Another outstanding speech given out by Macklamore was him confessing, how inspired he is by Australia, he congratulates us on having our shit together he then continues to talk about feeling the pain of horrific acts of violence even this far away he wants to bring up that we have a choice not to let fear and hatred get inside our heads regardless. This all leads into the track is Same love. This sort of sentiment would come through again on the track White Privilege II. It truly would be a miss of me if I didn’t write about how moving and powerful the performance of this track was an arena on there feet captivated by the words and the meaning behind them I never have felt anything like it as the stage lights blacked out and just focusing on Macklemore at the front were red spotlights and by the end of the track, a dark arena was all of sudden brightened by the glow of 10,000 cell phones absolutely astonishing.

Before we got into the last track before the encore we are pitted against others states and New Zealand for the gold medal of going off. I wasn’t at the other shows but I was damn well impressed with Sydney’s Olympic sized performance as we put our hands up like the ceiling Can’t Hold Us.

The encore actually starts off with a tale told to us in video it is really hilarious I can’t even begin to describe it for you all nor do I want spoil it for any one who is still headed to the shows but all you haft to know is it lead us into the best dance party in the world and all we could do was dance dance and so we danced and had a really really good time afterwards we were challenged to a Dance Off.

All good things must end and after an inspirational message of chasing your passion and a real heart felt thank you to the fans for making it all possible we are headed Down Town and Eric Nally was on tour with them to do his part, ticker tape exploded down upon us and sparkle showers rained down on the stage and 10 000 people were moving to the beat it all ends in ceremonious applause. Macklemore dedicated the show to Lucy Rueben and family thanking those who came out and shed their ego and enjoyed independent hip hop music telling us it what was magic and I couldn’t agree more.