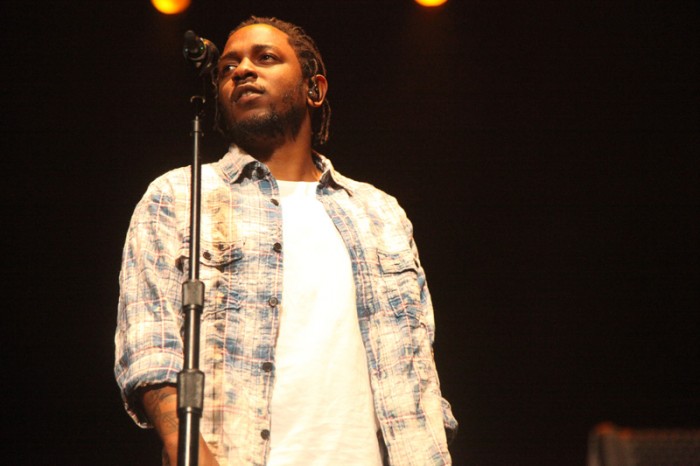 It is Wednesday night in ole Sydney Town and I can feel excitement in the air as I step of the train at Olympic Park Station. The evening temperature is pleasant, the sights and sounds of the Royal Easter Show are all around me as I make my way amongst thousands of other concert goers towards Allphones Arena to see Grammy Award winning artist and number two place getter on the 2016 Triple J hottest one hundred Kendrick Lamar.

The lights go down the crowd lets out more then just a cheer as the ladies in the house shriek in hysteria the masses are on there feet and the people chant add-mist the deafening screams Kendrick ! Kendrick ! Kendrick ! all this is going down as the backing band play some funky little smooth jazz type number giving Kendrick time to take his position front of stage. He stands there in front of the mic as I look up at the giant screen you can see the intensity on his face as he looks over the crowd he takes a moment to gather himself its all too much, the noise, the sheer size of the crowd he breaks away regains his composure then out come the words ‘Bitch this Dick Ain’t Free ‘.

His opening rap is outstanding. I am in absolute awe of this artist. Up the front of stage isn’t exactly what I would call a mosh pit but it certainly is like one as bodies are packed in nice and tight with no real room to dance the crowd can only wave there hands in the air, rock and sway to the beats of opening tracks Wesleys Theory and Backstreet Freestyle.

From beginning to end the crowd know every song word for word as chorus and verse are sung back time and time again. Asking ‘who has been with me from day one ?’  we get early career hits like Swimming Pool and The Art Of Peer Pressure.  You can see by the expression on his face how much passion goes into his performance you can tell he truly means it when he addresses the 18,000 strong crowd reflecting on the first tour and how he played to only 700 people and how electric there energy was. Wanting the same level of energy from tonights concert goers he asks Bitch Please Don’t Kill My Vibe.

If I weren’t already having a good time at this concert ( which is impossible by the way) then that was certainly about to change as he finishes off the set with King Kunta the response is phenomenal as i can feel the All Phones Arena actually bounce I look around too see everybody in the place is on there feet jumping up and down screaming out ‘What’s the Yams!’  and ” We Want The Funk !’ as the speakers pump out some bass that tears right through me.

Kendrick walks off to take a break but the crowd are not ready for one they know what they want and they say it out loud “Alright’. He comes back out and asks that  we all put our cell phones and lighters in the air as we give respect to Phife Dawg the arena is lit up  brighter then Sydney Harbour on NYE its a magical experience one I am glad to have witnessed. Kendrick praises industry pioneers like Phife Dawg for whom with out them he wouldn’t be on stage right now being able to do what he does and he just wants us to know that “it’s gunna be alright”.

As you can imagine the crowd go mental and just as its about to end he stops the band an says its been along time since we been out here we got to tear this shit up and tear shit up they did. Another encore moment happens and I see a small circle pit open up to the bombastic A.D.H.D.

I don’t go around giving perfect scores for anything no matter what but I can’t not help myself tonight. Kendrick Lamar is flawless in his performance, his talent is abundant there he is just himself and backing band (whom by the way were nothing short of smooth sounding musical excellence) on stage no fancy set drops, back up dancers or pyrotechnics which is typical of any act who play this size arena. None of that was present, it was just the truly amazing talented Kendrick who left us with an ‘I love you all ‘ as he leaves the stage to finish off a remarkable and captivating performance.