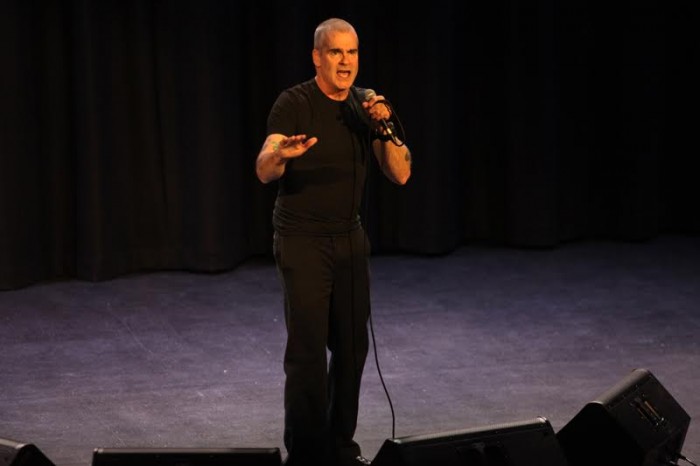 Henry Rollins is currently in the country and will be pretty much for the whole of September. Tonight is the first of his spoken word shows in Australia after touring it around the world since January. But it is us lucky Sydney siders that get to hear him speak first,for this special night I have ventured up to the Blue Mountains Community Centre to be part of his sold out performance.The centre is packed with middle age punk rockers in faded tees and unkept facial hair plus a whole collective of open minded thinking passionate punk rockers.

Opening with more then the as promised 40 second monologue about the American Presidential candidate Donald Trump and moving directly into just what the idea of American patriotism actually means to him. He would touch on LGBT issues, his travel adventures and love for it and would show real passion on issues concerning the future. When he speaks about his family and what is was like growing up as Henry Rollins is where his anecdotes are quite funny especially when he speaks about his love for music how it all got started and just how much his record collection actually means to him.

Quite often he would refer to us as sexy Australians and profess his love of being here amongst us. He talked about how much he loves Australian bands, when he delivers this love for us he isn’t doing it to by pandering to us he genuinely means it.

If you are going along and not knowing what to expect then let me tell you, you get two solid hours of uninterupted Henry Rollins goodness. Listening to Rollins speak was a real pleasure he would in some points have us laughing out loud and on other stories move us inside along with making us think about the issues and question everything. Rollins himself at the opening of his show described it as sounding like Hemingway on speed and I think that is a fair description of what is a great night.