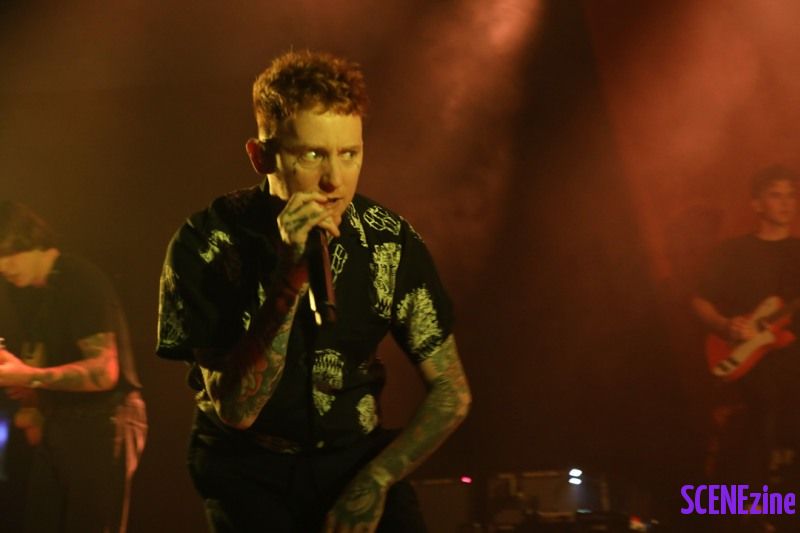 UK punks Frank Carter & the Rattlesnakes are a relentless touring force, having now returned to our shores in their biggest run of headline shows to date. This is the bands fourth Aussie stint in just over two years. After selling out dates across the country previously and touring last April with fellow country men Bring Me The Horizon (read our review). Having already kicked things off in Brisbane, tonight they have come to the Roundhouse to slay us Sydney siders and give us a taste of some classics alongside some new tracks from their third record ‘End Of Suffering’ .

Opening the night are Eat Your Heart Out, the band recently made it on the SCENEzine top ten albums list and are becoming a support act staple of numerous punk bands and festivals touring Australia. It is worth turning up early to see them play their signature brand of pop punk bangers.

Next up we have Tassie favourites A. Swayze & the Ghosts who only recently had their support run extended to include Brisbane and Hobart. I had to make sure i saw what all the fuss was about, having never heard of them till tonight. A band that absolutely puts the rock in Punk Rock, this three piece have an up beat tempo that keeps us bopping along. A sound reminiscent of say early Vines meets Iggy Pop and they prove what i have always thought, that there isn’t enough tambourine in punk rock.

With a roar and some fan fare Frank Carter And The Rattle Snakes take to the Roundhouse stage, instantaneously the floor begins to swell up with bodies. The band begin to riff away and the man asks “who’s here to Rock n Roll ?” in response we scream as they kick things off with a new a one, Tyrant Lizard King.

We are only two songs in and Frank is right down the front with the fans amping things from what was already a well dialled up 11 to 111. The crowd held the front man high as he crowd surfed and sang not missing a single note or lyric to another new jam Kitty Sucker which is was a definite set list favourite.

Having seen quite a few Frank Carter and the Rattlesnakes shows before, i know how dynamite and unique his sets can be. But tonight was something new and i felt kind of special, as he called for us to hold our girlfriend, boyfriend, best friend or total stranger close and have a bit of dance during Love Games.

Having earlier to cut the track Anxiety short to remove a patron, Frank took the time to let us know their is no hate only love at their shows and he makes sure we know that. And with his music and words reminds us if any one we know is suffering in any way we should pick up the phone and check on them. Its moments like this that remind us why the punk community is so strong and why music matters, especially the live stuff and with the track Jacklals the crowd open up a ladies only mosh pit.

Most of the set had been showcasing the new stuff off the latest record ‘End Of Suffering’ but as we approached the apex of the night they had saved the best for last and let loose three of the bands previous best. Devil Inside Of ME, Trouble and the set finisher I Hate You getting a huge crowd sing along.

It was the type of show that had has running dancing along and singing out loud. Another solid explosive, jaw-dropping and energetic set from UK punks.