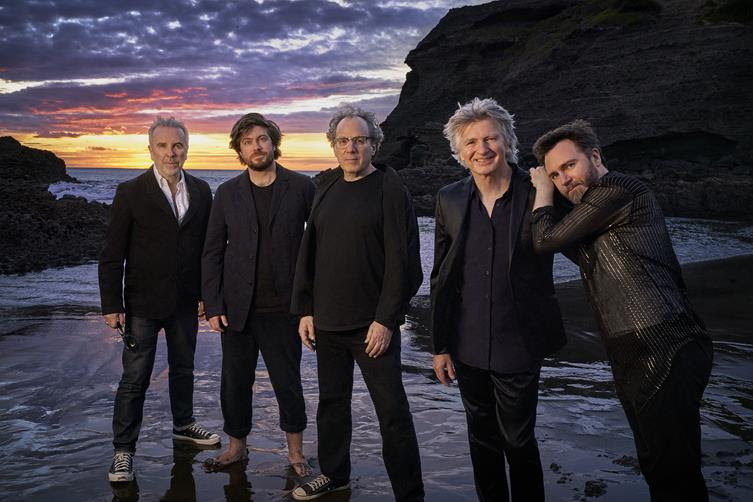 A cool breeze graced our skin upon our evening stroll over to the brand-new ICC complex in Darling Harbour. A wonderful start to a night that would take off inside Sydney’s stunning new venue.

Walking into the Aware Super Theatre, we got a wonderful glimpse into what post-COVID life will be like in Sydney, with the return of international artists and events on a large scale. The theatre filled to the brim with a Crowded House of live-music lovers absolutely buzzing with eagerness for the night that was about to unfold.

This highly anticipated event, promoting their 2021 album Dreamers Are Waiting, is part of the bands’ first national tour since 2010; and the first featuring their new line-up unveiled earlier this year. Led by founding members; Neil Finn & Nick Seymour, the pair have teamed up with Finn’s sons; Liam and Elroy; and keyboardist/producer Mitchell Froom. Despite being different from the band’s original line-up, nothing is missing from the new team. The Finn sons have lived and breathed Crowded House since they were tots; It’s Only Natural for them, and it’s clear that they are destined to be part of this legacy.

First to the stage, warming up the crowd was Australian Indie favourite; Middle Kids, smashing out a solid set of familiar originals. With earworms such as ‘Edge of Town’ and ‘Stacking Chairs’ these rockers brought fresh energy to the room to get the audience riled up for the main event – and we R definitely 4 them.

Finally, it was time for the event we’d been waiting twelve years for. Our hearts beating fast, and a rush of dopamine ensuing as the familiar opening riff of Weather With You begins to resonate from the speakers. It is apparent how much both the band and audience have missed this; with the crowd singing every word and chanting back to Neil Finn in response to his cues.

Neil Finn, as lively as ever, introduces the band to the stage and addresses the audience with a heartfelt speech. Nick Seymour, wearing a kilt in ode to his Irish roots, can’t wipe the smile from his face. It’s clear that their spark is still ever-present. Accompanied by a beautiful set of imaginative visuals on screen behind the band, they play several of their hits, each as well-received as the last by the audience, with everyone in the crowd harmonising with the band for ‘Fall At Your Feet’.

After the bands initial selection of songs and warm welcome back to the stage, they invited supporting act Middle Kids to the forefront to accompany them on some tracks off their new album Dreamers Are Waiting. Neil jokes of the impact of COVID on the environment of touring saying “We’ve been on tour with you – but only see you with masks on. So that’s what you look like?!”.

With a giggle from the crowd and the band alike, Neil confirms that Middle Kids are a very good looking band and thanks them for their support on this tour.

With perfect harmonies across the stage, ‘Playing With Fire’ and ‘To The Island’ had the crowd intently listening to the brand new songs that have never been played in Sydney. The band then geared up to play some classic hits; ‘Pineapple Head’ and ‘Four Seasons In One Day’ being some crowd favourites, with a harmonious hum heard throughout the theatre. The calm and collected mood was suddenly juxtaposed when the band fused ‘Sister Madly’ into an unexpected mashup with Led Zeppelin’s high-energy hit ‘Whole Lotta Love’, getting the whole crowd riled up.

‘When You Come’ was a standout of the night with Liam Finn (on guitar and backing vocals) coming to the realisation of the double entendre this song possesses – and that he was likely singing about his parents. ‘Don’t think of it so literally!’ Neil politely reassures him, with laughs from the audience in response. The unpredictable stage banter was both hilarious, and a reminder that nothing beats live music.

Another highlight of the evening was the performance of classic crowd favourite ‘Don’t Dream It’s Over’. With its heartfelt lyrics and melody, everyone in the audience was feeling the energy radiating from the stage. It added to the wholesome atmosphere of the night and was a humble reminder of how lucky we were to be in this room witnessing such a special moment with the band we all love so much.

After a smashing set, the night was drawing to a close. With ‘Distant Sun’ sparking the audience for one last hurrah, the band waved goodbye and left the stage. In protest, the crowd applauded, with the roar of excitement filling the ambient theatre. The curtain call brought the boys back to the stage with Neil taking off his jacket for the final encore of the night.

‘Something So Strong’ had audience participation to a whole new level, with most of the crowd up in their seats, singing and dancing along. Taking it down a notch with their new heartfelt track ‘Goodbye Everyone’, led by Liam Finn, we got to watch in awe as we understood just how much he sounds like his father.

After one last goodbye, Neil thanks the band and audience, especially American keyboardist, Mitchell Froom, who produced the bands breakthrough album Crowded House in 1986. “We’ve only been trying to get him to join the band for 40 years or so” – finally Neil’s dreams are coming to fruition.

As it’s getting late, Better Be Home Soon seemed like a fitting way to end the night. With the audience returning to their feet once again, we all sang the familiar lyrics in unison, with Finn challenging us to chant the harmonies, before joining the rest of the band in the centre of the stage for a final bow – fit with a standing ovation from the crowd.

But this unmissable 24-song set doesn’t end here – in case you weren’t Super Aware, due to popular demand, and a series of sold-out gigs, the band is playing a second Sydney show tonight, Wednesday 13th April, you really don’t want to miss this!