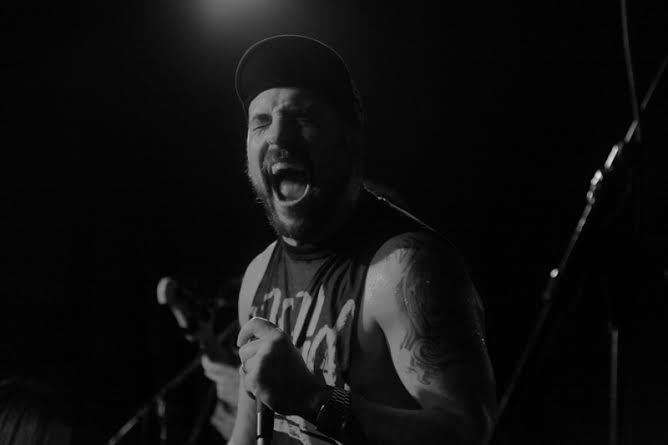 Man this band must love Australia they were only here in April last year and now they are back. Let me tell you sometimes as a reviewer you find yourself attending gigs solo, but in this scene I think you are never alone and as I chatted and caught up with old friends before the gig we were joined by lead singer Nuno Pereira, this is in no way a brag but a testament to the type of band A Wilhelm Scream are. It wasn’t just Nuno but i saw guitarist Trevor Reilly (Read our interview with Trevor) out amongst the fans too.

Normally I wouldn’t write about a warm up i only mention it this time because it just adds to the character of this band as lead singer Nuno does his check on communicates with the sound guy his hilarious quips an antidotes keep us amused. He tells a punter to stop txting and boom! they get into it with The King is Dead.

It’s hard not to radiate with energy spewed forth from the stage and over worked speakers when a band with the sound of A Wilhelm Scream start to get going thats when then floor begins to start bouncing they are Killing It. The set powerhouses through and a happy bday call is made before I Wipe My Ass With Showbiz,the ever faithful mosh keeps things energetic up the front to tracks 5 to 9 and Walkin With Michael Douglas.

Did I mention the venue is small an up close and that crowd surfers are expressing themselves but instead of being ejected they are helped up on stage by Nuno Pereira to let out there energy. These Boston locals give thanks to the Holy Trinity of vodka beer an Jamison for their performance. The love of the crowd is really appreciated . ‘All my friends are anchors end‘ the crowd sing along too over and over on Anchor.

The song Congratulations is dedicated to an audience member whom Nuno never broke eye contact with during the opening verses it was pretty funny. If I haven’t painted the picture clear enough let me reiterate the energy never let’s down during show I mean never ever. It was continually in motion and whilst I may have seeked refuge up at the back, it was awesome to watch those around me with the energy moshing and never letting the band down, appreciating all of the songs they played. This is what a great venue like the Factory Floor does well getting fans and the band up close to one another.

The band ask to open a circle pit for old times sake and a circle pit ensues during The Kids Can Eat A Bag Of Dicks. We are asked to put our hands together for support act Dividers saying “they have never scene anything fucking like that” then it’s Me vs. Morrissey in the Pretentiousness Contest.

Before the last song there is a massive shout out to Perth band the Decline for there hung over driving ability and hauling the bands gear all over this great big land of ours. It is time to close out the now 18 song strong set and end things with Famous Friends and Fashion Drunks which during the chorus Nuno gets amongst the mosh.

Straight away the crowd starts the one more song chant and Nuno address our request by saying ‘you realise I am pushing 40 right chill the fuck out‘ ,the band never really exit the stage, as the crowd chant moves on from one more song into a direct request for We Built This City but before we get our request we are encouraged to drink responsibly to which the crowd boos and then instead Nuno suggest we smoke weed thats much better received as the crowd cheer.

They walk off stage with a call to ‘support you fucking scene and support this energy cause it’s all we fucking got’ and I haft to agree catch A Wilhelm Scream on the rest of their Australian tour and get out and see any form of live music.