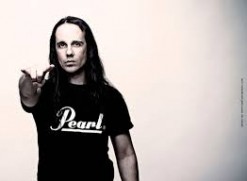 One of the most respected, inspiring and legendary drummers of all time, George Kollias will return to Australia in March for a series of solo performances and workshops around the country.
These performances aren’t “just for drummers”, any fan of music that pushes the boundaries will be amazed, inspired and left in awe.

George is best known for his work with extreme metal legends Nile who are no strangers to Australia, having toured here several times over their illustrious career.
He is also known for his critically acclaimed educational DVDs Intense Metal Drumming Volumes 1 & 2, and his latest book The Odyssey Of Double Bass Drumming.
Added to that, George’s Youtube videos have notched up millions of views.

Pushing all musical boundaries and the limits of what can be performed on a drumkit, audience members will be left in awe of George’s insane abilities.
George will perform a selection of Nile material, as well as debuting his own solo work for the first time to Australian audiences.