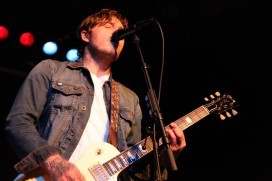 It was a rainy summer Sunday evening in Sydney and as the pink sunset collided with grey clouds the mood had been set. This was the Gaslight Anthem’s second show in Sydney of the tour as they played Enmore Theatre last night. This gig was built as something special though as it was by request. Attendees had the ability to go online prior to the concert and request songs they’d like to hear played. This was unique as it was the first time ever The Gaslight Anthem had done a by request show. The venue was the Factory Theatre which is in Marrickville set amongst a backdrop of gritty industrial buildings with a smaller intimacy than the Enmore Theatre.

Fake Problems vocalist Chris Farren took to the stage first in solo mode. Accompanied by only a guitar and microphone the Florida native was a great fit as support. His songs resonated with emotion and sadness. Exploring themes of relationship breakdowns and self awareness. The crowd had filled up the room quite well for Chris and whilst all seemed new to his music were listening intently and respectfully. He let the audience know this was his first trip to Australia and was loving it. Chris played for close to half an hour and before finishing his set let the crowd know he would be hanging out by the merch table selling tote bags with a photo of him topless on them. Chris was quirky yet fun. A genuine singer songwriter who I’m sure won over many new fans. 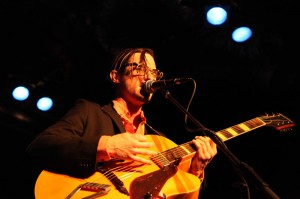 After a short break the relatively small venue had started to reach close to capacity as the anticipation built for The Gaslight Anthem to hit the stage. You could feel the excitement in the air as the audience early awaited Gaslight with smiles on their faces and many clutching beers.

Cheers erupted as The Gaslight Anthem walked on stage. But unlike usual Gaslight shows where they kick straight into the music Brain grabbed the microphone because straight away you could tell he had something to get off his chest. He then explained that after last nights Sydney show some kid said if Brian ever talked about ice-cream on stage again he’d punch him in the face. Brian said well if he is here tonight he is welcome to come on stage right now and try but I can guarantee you I’ve been hit by worse. Brian then telling the crowd that kid had obviously has never been to a Gaslight show before because my on stage banter is part of the show and if I want to talk about ice-cream I will.

Brian ended his speech by saying from now on I’m going to talk about ice-cream at every show and he can suck a big fat one as the band aggressively kicked into “59th sound’. This was met by huge cheers from the crowd as they began to sing loudly along to every word. This was followed up by the equally catchy “handwritten” which kept the audience at full voice as beer drinking to a back seat to singing along. 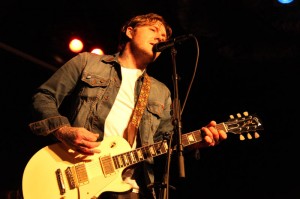 Gaslight next gave us “old white Lincoln” and “the spirit of jazz” before touching on their newest album Get Hurt by playing “1,000 years”. Brian with a smirk on his face told the crowd how good looking Australian guys are. Laughing and saying how he went to catch taxi and noticed so many Aussie guys look all tanned and muscular. This broke the tension from his earlier speech and set the tone for the rest of the show.

The by request part of the show became evident as they then gave us “red at night” which for the die hard Gaslight fans this is truly special as they haven’t played it live in many years. From American Slang we then heard “the diamond church street choir” where Brian stopped mid song as he wanted to hear Alex Rosamilia play some whammy bar as it reminds him of David lee Roth then started to take his singing to a higher pitch to match. After the banter between singer and lead guitarist they effortlessly flowed into the rest of the song. With the crowd chanting the songs lyrics “everybody singing who does it better than we do” it seemed highly appropriate.

Straight after they had finished playing “old haunts” the crowd became vocal and started yelling out song titles. Brian heard a guy call out “behold the hurricane” which is from one of his other band The Horrible Crowes. This led Brian to say that this it is not a Gaslight song and this is not a covers set. Then the crowd started calling out other artists names as ranging from Taylor Swift to Led Zeppelin. Brian laughed and the band indulged a little by playing riffs from Led Zeppelin and Rolling Stones.

Before playing a slowed down version of “great expectaions” Brian dedicated the track to Jack from the band Bayside. Letting the crowd know how much respect he has for him as Bayside played a huge tour with Gaslight all whilst Jack was in need of spinal surgery. Gaslight then picked back up the pace with tracks like “meet me by the rivers edge” with the audience echoing Brian’s sentiments of Sally said.

After playing a down tempo “Mae” Brian then stopped to talk about ice-cream. Explaining for those who weren’t at the Enmore how much he loves Baked Alaska ice-cream. While recording Handwriten he was treated to it as the engineers wife made it. Brian also told of his love of fried macaroni cheese from the American Cheese cake factory. This on stage banter subsided then Gaslight played some more classics including “45” and a slower version of “wherefore art thou, Elvis?”. 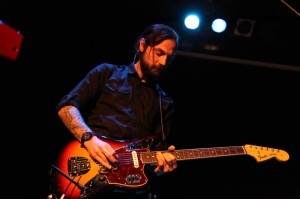 A few songs later Brian called Chris Farren onto the stage with Brian firstly asking Chris what food he likes. They both agreed upon the biscuits you get before the food at American restaurant Red Lobster and high fived. Then Brian explaining their is a few things he like but in general he thinks food is a overrated and a waste of time. Saying it just gets in the way of getting stuff done. Brian then lets the crowd know they are going to cover “songs for teenagers” by Fake Problems. Brian and Chris harmonise throughout breathing new life into an older Fake Problems track that showcases Chris’s song writing talent.

After Chris had left the stage Brian then addressed the fact that Gaslight don’t play encores. Instead of walking off stage then coming back on they just choose to keep playing. What happened next was personally the absolute highlight of the night. As the intro started for “here’s looking at you, kid” it was literally spine tingling. Not only is this one of my favourite Gaslight tracks but hearing the emotion behind Brian’s heartfelt lyrics live was truly memorable.

Lastly Brain thanked everyone for voting for songs saying the band had really enjoyed relearning some of the older tracks. Then telling the crowd they are going to end the set how the used to in the early days by playing “We’re getting a divorce, you keep the diner”. This had been what many of the long time Gaslight fans had been waiting for with many getting rowdy in vocal approval. 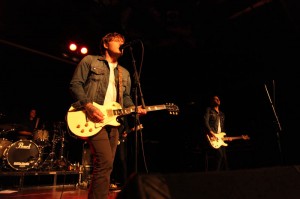 Looking back on the gig I wasn’t really sure what to expect. The set list itself wasn’t too far from the previous nights at Enmore Theatre. I would of really liked to of heard “get hurt” and “break your heart” from the newest album. I’m sure every audience member missed out on hearing certain tracks they have grown to love though. Getting to see Gaslight in an intimate venue and hearing some older classics made the by request show something special and a true keepsake for all fans in attendance.