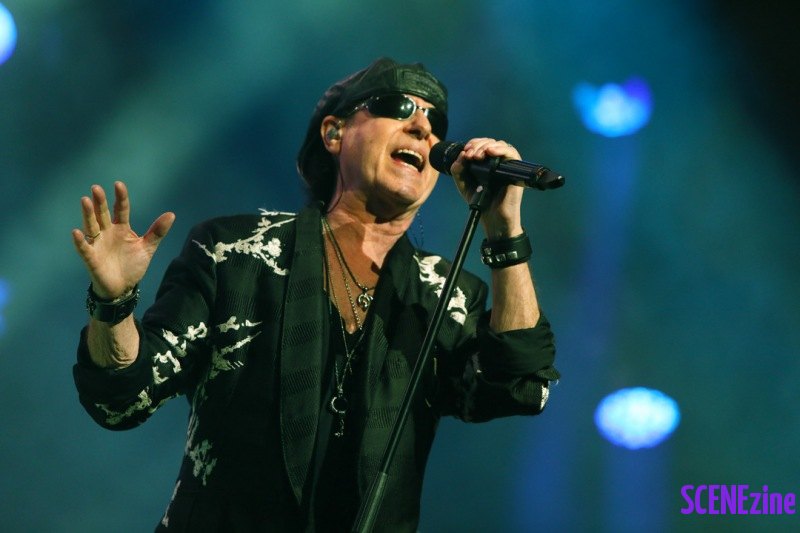 After a postponement on Saturday night with lead singer from the Scorpions needing hospital for kidney stone removal we are back in black at Qudos Bank arena ready for a double headliner of power metal heroes Whitesnake and The Scorpions.

First up in this treat of legendary rock is Whitesnake who have had a 12 yr absence for our shores and the fans in the arena tonight are ready to be rocked. The lights kick out and the Who My Generation plays as an intro track then when the stage light flick back on and the instruments fire to life, the crowd roars as front man David Coverdale walks out screams at the crowd ” are you ready to rock ?” and the band fire away with Bad Boys.

The guys are red hot tonight inside the arena as they deliver hit after hit from their astonishing career with David using the runway stage to be right up the front with the fans and Slide It On In as he gestures the mic towards the crowd to help sing along. But you must hand it to the dazzling guitar brilliance of current band members Joel Hoekstra and Reb Reach these two guitarist simply slaying it on every track and even had a guitar off during the set. One man enters and plays a killer riff from somewhere in metals musics rich history, then the other man showcases what he can better and to finish they combine forces and deliver one of the most metal versions of Waltzing Matilda I have ever heard. Not to be out done drummer Tommy Aldridge would have his moment to showcase his skills pounding on the skins with his bare hands.

The big moments in the set came with the big hits for sure on Ain’t No Love In The Heart Of The City, the band dedicating the track to the fire fighters. The bluesy rock track now more acoustic and the whole band were all forward at the top of the runway stage . Then post drum solo David asks the big question of us Aussie fans wanting to know Is This Love ? Now as you get a sense the show is hurdling towards its finish point they set us up to go out with a huge one two finish. First up you get everybody out of their seats and standing for one the best power ballads of all time Here I Go Again and then to say goodbye it was Still Of The Night. The bands took a final bow to say thank you and goodnight receiving a standing ovation for the performance they just gave us let’s hope we don’t suffer another 12 year absence from a band that made us wanna rock.

Double headliner rock shows you get all built up in the opening band only to realise after a short break another awesome set is about to be unleashed upon us.

Opening with a slick movie production of helicopters flying through the city ready for a precision tactile operation which I think is a precise metaphor of the live performance the band are about to deliver. The Scorpions take to the stage and instead of Going Out with a Bang they open with one.

One thing that is immediately impacting is the use of the huge video screen across the stage. Its a flashy mix of the band onstage washed over the most insane filters and accompanying that is imagery that is sexy, exciting and very metal.

Front man Klaus Meine is looking sharp, hard to believe he was just in hospital a few days ago for a kidney stone removal and is here now rocking about the stage. Still sounding pitch perfect as he hits those dazzling higher notes, he says sorry for the Def Leppard support cancel and having to go to hospital Saturday night but they are here now and they are ready to rock. He then does a huge song medley of tracks Top of the Bill / Steamrock Fever / Speedy’s Coming / Catch Your Train

Musically they are sharp and precise and an absolute powerhouse of sound this is lead by guitar master Rudolf Schenker and backed up by the technical brilliance of Matthias Jabs. The two eventually having their own solos/jam session that see’s them joined up front by each other band member including Klaus now brandishing some guitar skills himself.

Frontman Klaus takes a time out to applauded the efforts of fellow musicians who played Fire Fight Australia Bushfire Relief Concert just last week at ANZ stadium which is adjacent to Qudos Bank Arena, citing how much the the crisis has moved the band and how commendable the efforts of all involved have been. He brings the whole band to the front of the runway stage and dedicates one of the most fitting songs ever to all those helping in the crisis Send Me An Angel. Played acoustic the arena lights up with their phones waving and it becomes one the truly inspiring live music moments I have ever seen.

From one live music inspiring moment to the next it’s been 30 years since the Berlin wall came down and with that the band deliver their symbolic anthem of the political changes in Eastern Europe at that time The Winds Of Change.

It is now time for drummer Mikkey Dee to show us his insane talent. The former Motörhead backline man is now raised high on a platform above the stage. Smoke blows out from beneath him and lights flicker all around him to each strike a dazzling sight and well executed solo that would do Lemmy proud.

Time had come for a big finish with Big City Lights they take a bow and the crowd get amped up to call them back out. Showing just how much they are Still Loving You, us the fans show how much we are loving them in return and then the final moment we had all been waiting for The Scorpions let it all out and Rocked Us Like A Hurricane.