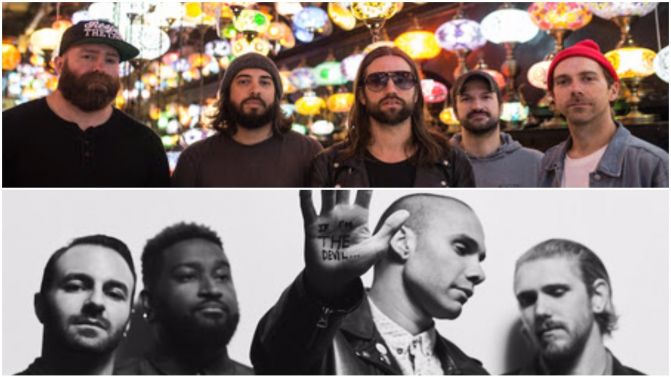 EVERY TIME I DIE and LETLIVE. are joining forces to play a string of national co-headline dates across Australia in January 2017 with very special guests, COUNTERPARTS.

Buffalo, New York hardcore band EVERY TIME I DIE are no strangers to Australian shores from playing the main stage of The Big Day in 2013 to countless headline shows across the country. They’ve just completed their seventh Vans Warped Tour in US and will show case their brand new album Low Teens, set for a September 23 release. Engineered and produced by Will Putney (The Amity Affliction, Acacia Strain, Thy Art Is Murder), Low Teens features guest vocalists with formidable bellower Tim Singer (Deadguy, Kiss It Goodbye, No Escape) and longtime friend Brendan Urie (Panic! at the Disco).

EVERY TIME I DIE has always juggled hardcore urgency, metal brutalism, and rock melodies, but never has it felt this instinctive or this vicious. As their music has grown and evolved, though, so has their energetic live show.

Since their beginning in 2002, LETLIVE. has been a band that is not easy to categorize. With a sound that Afropunk described as “the first truly unique post-hardcore band in years.” The radical Los Angeles punk band released their fourth studio album entitled If I’m The Devil… which debut at #18 on the ARIA album chart and has had critics raving. ” California post-hardcore outfit deliver their first classic’ said Rolling Stone Australia while Upset Magazine gushes, “More than a band you go and see, letlive. are a band you’re a part of.”  and NME hails “letlive. meld incisive protest politics with caustic guitars. This is what raging against the machine sounds like in 2016.”

Those who have witnessed a LETLIVE. show can attest that it’s one of the most intense and explosive live shows you will ever witness. It is a connective, reactive and provocative experience that transcends the standard band performance and stage/audience dynamic.

COUNTERPARTS has come quite a long way since their formation in 2007. They were named Alternative Press’ “100 Bands You Need To Know In 2012” and have toured US, UK, and Europe alongside August Burns Red, The Ghost Inside, Bane, and label-mates Terror. Absolute Punk raved about their live show “rip-roaring intensity, haunting and powerful lyricism, solid song structures and vocals that guide each song forward with a remarkable sense of command”, it is abundantly clear that this Canadian hardcore band is here to stay.

With a line-up like this, it promises to be the must see tour of the year.