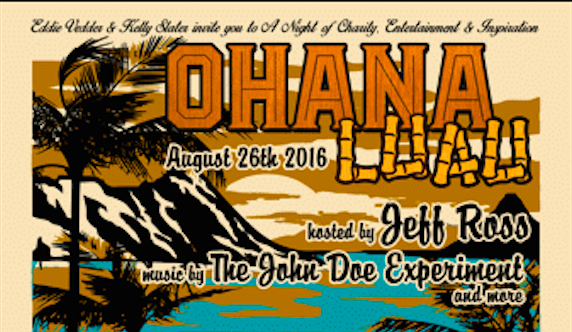 The night prior to the event, Friday, August 26th, Eddie Vedder and Kelly Slater will be throwing The Ohana Luau – a kick-off celebration at the Ritz-Carlton, Laguna Niguel in Dana Point, CA. A night of inspiration and entertainment, the event will be hosted by ‘The Roast Master’ himself Jeff Ross, alongside Eddie Vedder, Kelly Slater and friends. A portion of the proceeds will benefit The San Onofre Parks Foundation, a California non-profit that cooperatively works with California State Parks to develop, preserve and enhance the recreation and experience of California’s unique and beautiful coastal parks. California State Parks-Orange Coast Districtand the San Onofre Parks Foundation are excited about this opportunity for a fundraising event, specifically focused on the protection and enhancement of public recreational resources along the California coast. It is their mutual mission to preserve these world treasures for the citizens of California.

The Ohana Luau will include dinner, drinks, live entertainment and laughs. A hilarious live auction hosted by Jeff Ross will feature various limited edition and one-of-a-kind items, memorabilia, gift packages, and more to benefit The San Onofre Parks Foundation, and world acclaimed big wave surfer Greg Long will be speaking on behalf of the foundation. Live entertainment will be provided byJohn Doe of X, and the luau will feature a few special songs from Eddie Vedder. Dinner will be prepared by chef Brian Sundeen at The Ritz-Carlton, and guests will dine on the bluff overlooking the Pacific Ocean, the hotel pool courtyard, as well as in the Grand Ballroom.  The Surfing Heritage and Cultural Center has also lent various priceless surfboards from their collection to be displayed for the night.

A number of the items available at the auction have just been revealed, including Kelly Slater signed surfboard and competition rash guard and wrapped and autographed Braven wireless bluetooth speakers, an Eddie Vedder autographed guitar, a Lowers Pro t-shirt signed by over 14 professional surfers, a Katy Helen Art GlassD Mosaic Surfboard, and various other items fromVolcom, GoPro, InCase, and many more.

An extremely limited number of packages including discounted rooms at the Ritz-Carlton for the weekend and Ohana music festival admission are available for charity gala at http://luau.theohanafest.com. The intimate event will be capped at 500 attendees.

For the most up-to-date information on the Ohana Luau, please visit: