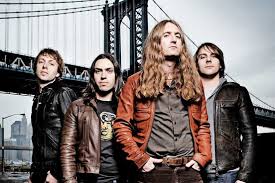 Founded in Northern Ireland in 2000, The Answer have spent the last decade proving their rock ‘n’ roll credentials and making the kind of life-affirming, eardrum-threatening music that separates the truly great from the merely adequate. Cormac Neeson chatted to SCENEzine about the new album, touring with AC/DC and the Irish Rock Scene.

SCENEzine: Firstly thank you for your time. How has 2015 been for you so far?

Cormac: Its been okay, it’s kind of the calm before the storm ya know. Our new record comes out march. The first couple of months of the year we have been getting our new set together for the tour. Also doing a lot of press and just basically getting the record set up to get out on the road and not come home again for six months.

SCENEzine: What can fans expect from your new album Raise A Little Hell released in March?

Cormac: It’s a good time rock n roll record. I think it’s a record where you can hear the band are having a lot of fun writing and recording the songs. It’s nice and free its relatively diverse and compared to some of the other stuff we put out. There is lots of light and shade lots of great riffs great melodies and great songs.

SCENEzine: The album itself was helped along by pledge music. How did that all come about?

Cormac: It’s a pre order campaign that pledge music actually co-ordinated for us. It’s one of those things we didn’t know you could do whilst being signed to a record label so we were able to get the best of both worlds. So the record label can do their thing and push the record and get it set up and let it run once its been released. The pledge people run the pre order campaign and our fans can go online and pre order the record but they also have the chance of getting all this other extra stuff. Like signed lyric sheets, drum skins, guitars, people can also have us come round and have us play a gig at their house. These are all the extra bits that are tailored made for our hardcore fan base. Basically you know the people are going to really appreciate that stuff so it works out really well for everyone involved.

SCENEzine: The artwork for the album looks awesome. Can you tell us a a bit about that?

Cormac: This time round we wanted the art work to reflect the sentiment of the album which is the band having a good time and not taking ourselves to seriously.
The in house artist of our record label came up with the concept of having comic book character alter egos for each member of the band. We decided to let him run with it and see where he’d got to with it and he came up with fantastic record cover art work that is getting put out there. 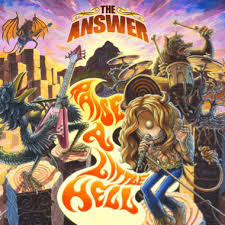 SCENEzine: Your new album is getting the vinyl treatment. Are you excited by how much vinyl is making a comeback?

Cormac: Oh yea I am a vinyl collector myself and I would quite often on the road loose myself on a day off go out and find some quality vinyl, whether it be in a charity shop or more functional music shops it’s a great thing its coming back in again. It’s something we have always embraced I think vinyl sounds way more organic then if you listening to your Ipod and I think people are starting to appreciate that again.

SCENEzine: Do you guys prefer playing club gigs or at big festivals?

Cormac: A bit of both really man if I play along two month club period around Europe you really look forward to stepping up on stage at a festival. With the sunshine in your face and playing a 40 minute set in front of an audience who are generally inebrehated and are looking for a good time the two compliment each other. But at the end of the summer you look forward to getting back on the club circuit and playing a hour and a half set or playing for as long as you want and in front of people who are singing your songs right back at you I just love playing live.

SCENEzine: Touring with Aussies AC/DC must of been pretty special. Do you have any fond memories of that tour?

Cormac: Lots of fond memories man 118 shows its was like a
year and a half of our lives playing sold out arenas to thousand and thousand of people every night. Venues like Madison Square Garden and Wembley stadium it was a pretty electric moment in the bands life and not something you forget in a hurry. 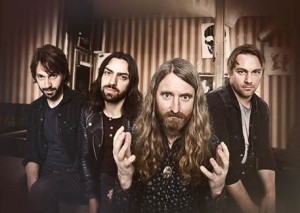 SCENEzine: Is there much of a rock music scene in Ireland at the moment?

Cormac: It’s pretty healthy and has been for a few years now. It kind of validates the stuff we have been doing over the last 9 years it also means it is cool again to play 70s based rock n roll music. Especially in Belfast there are plenty of good rock n roll bands on the local scene.

SCENEzine: Can you recommend any good Irish Rock bars?

Cormac: Yeah there’s lots of them man if your coming to Belfast you wana be going to Katey Dillys or Voodoo. If you go to Dublin actually you don’t wana go to Dublin it’s a scary place (laughs) man there are lots of dark and dainty rock bars dotted around Ireland. You don’t haft to go to the two capitals like I said there is great scene going on over here so you should check it out.

SCENEzine: Is 2015 all planned out for you already? Any chance an Australian visit is on the cards?

Cormac: Were touring pretty much till the end of our summer we go round the UK in March and Europe in April then its off to the States in May. Then a whole bunch of European festivals in June & July and then back to the states in August. So after all that I would like to think we can head down to Australia because its been a couple of years now and we don’t want you folks forgetting who we are.

SCENEzine: Lastly thank you for your time. We can’t wait to hear the album in full. Any last message for your Australian fans?

Cormac: Check out the new record ‘raise a little hell’ keep listeneing to the answer and we hope to see you soon.