BLACKEN returns for it’s fourth incarnation this weekend as a two day festival: LIVE IN THE DEAD CENTRE OF AUSTRALIA! More than twenty bands from around the country descend upon Alice Springs for a weekend of music, camping, and community-spirited heavy metal culture.

Since it’s inception in 2013, BLACKEN has been bringing some of the biggest and best bands in the country to Central Australia to play alongside the thriving local scene. The Easter weekend event has become a musical icon in the small town, each year leaving local and visiting audiences asking for more. This year event organisers, The Black Wreath, are delivering exactly that!

BLACKEN takes place March 26 -27, doors open at 3PM on Saturday and the event continues throughout Sunday. This is a licensed / all-ages event.

Back home from their second European tour, King Parrot, are the main headline act on the Sunday night. Since their unforgettable performance at the first ever BLACKEN Festival in 2013, they’ve released a brutal second album, received an ARIA nomination and toured the world relentlessly, sharing stages with some of the biggest names in the genre. Icons such as Max Cavalera (Sepultura, Soulfly) and Phil Anselmo (Pantera, Down) have taken them under their wing and onto stages around the world.

King Parrot vocalist Matt Young is a big supporter of the event: “BLACKEN is one of the most unique metal festivals I’ve ever been to. The local community get right behind the event, and I can honestly say they are some of the most passionate supporters of metal in the world.”

Brisbane’s brutal death metal powerhouse Disentomb are set to annihilate Alice when they headline the Saturday night. Having just returned from Europe, they’re stomping into town for an exclusive performance at BLACKEN before heading over to the USA to support juggernauts The Black Dahlia Murder on their most prolific tour to date. No-one will be safe from the sound of the heaviest band to ever play BLACKEN!

Long-time BLACKEN supporter Lochlan Watt of Triple J’s The Racket returns again, this time bringing his epic band Colossvs along for the ride: “Having been to BLACKEN every year since its formation, I am very excited to see it take the next step. Turning it into a two day camping event is something the dudes have been talking about ever since I had my mind blown by my first taste of metal in the Territory. I can’t wait to be a part of heralding in this new era and everything else that is still to come.”

The event takes place at a new venue, with a massive outdoor stage being erected at the Gap View Hotel, beneath the stunning MacDonnell ranges. The festival site will host multiple gourmet food-vendors, a fully stocked bar, merchandise and market stalls. There is also a camp-ground with showers and utilities, two swimming pools, a skate ramp, street art demos an open-mic session and lots more in store for attendees. 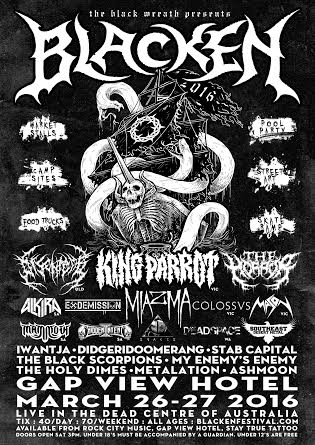