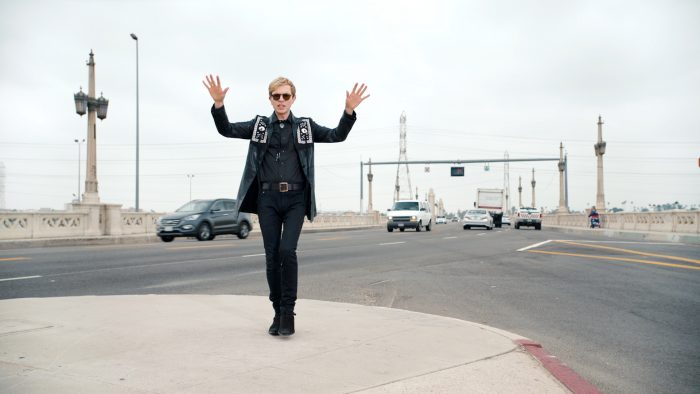 “Wow,” the utterly infectious Beck single that’s been streamed more than 20 million times worldwide since its June 2 release and hailed as “an outrageous pop anthem” (ROLLING STONE) with “a kaleidoscopic chorus” (USA TODAY), now has a visual manifestation. With help from the collective of visual artists that heralded the song’s June 2nd arrival, co-directors Beck and Grady Hall have built a mesmerizing “Wow” world: one that alternates between Beck busting his sweetest signature moves and the adventures of surrealist cowboys, sentient floral arrangements and other imagination-stretching imagery. Artist contributors to the “Wow” video are Sam Cannon, Randy Cano, Andy Gregg, David McLeod, John McLaughlin, Jess Rona, and Steve Smith.

The stunning “Wow” clip adds further dimensions to what began in June as the first ever Instagram Explore feature song premiere. Dozens of Instagram artist visuals set to snippets of the new single received a combined 6 million views—plus 1.6 million views on @Instagram/@Music posts. The clips continue to live on the official @beck Instagram and Beck.com.

”The cumulative effect of viewing images on Instagram and other places online was an influence,” Beck said at the time. “Now you can scroll through the most disparate, diverse and fascinating images in the span of minutes. It’s a new form of experiencing visual media. The infinite amount of stuff out there is overwhelming and inspiring in the way that you have a form of expression that is alive and changing every second. Unlike a book or a film, it is continuously flowing, changing and is non-linear.”

In addition to heading out on a September 15-24 mini-tour, Beck is currently putting finishing touches on his forthcoming follow-up to last year’s Album of the Year GRAMMY winner Morning Phase. Co-produced by his Sea Change-era bandmate Greg Kurstin and Beck and to be released on Capitol Records, Beck’s 13th studio opus will feature both “Wow” and last year’s summer smash “Dreams.”