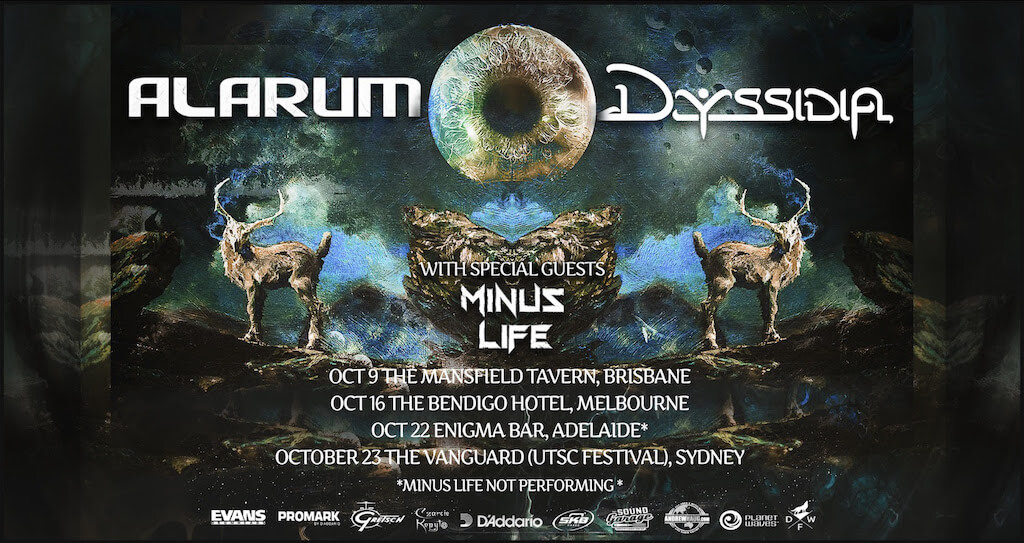 Melbourne fusion metallers, Alarum and Adelaide prog merchants Dyssidia have joined forces for a run of shows across October.

Joining them on shows are Brisbane heavyweights Minus Life who is launching their new album.

The Sydney show at The Vanguard will be part of this years Under The Southern Cross Metal Festival hosted by Stigmata Promotions. Alarum frontman Mark Palfreyman says of the tour: “Over the past 25 years we’ve had many years between our album releases. It’s now been over a year since our latest album release Circle’s End and it’s time to get out there and do what we enjoy most. With more shows outside Australia than in Australia the past 15 years, we’re extremely pumped to be teaming up with the amazing Dyssidia for these action-packed shows. Along with the return of Brisbane’s Minus Life and a ton of amazing support bands at all shows, it’ll be a long-overdue album launch celebration!”

Dyssidia drummer Liam Weedall; adds, “Since we released our album in the same month that the whole country first started locking down and we spent most of the year leading up to that finalising the album and not playing many shows, we are incredibly excited to finally be performing these new tracks around the country. Plus, what better band to be doing this with than the legendary Alarum! If you’re a fan of progressive metal, you’d be crazy to miss out on this.”

To celebrate the announcement of the tour, Dyssidia has released a music video for the track,  Hope’s Remorseful Retreat.

One of the more adventurous progressive acts, Alarum effortlessly blend heavy metal with elements of rock, latin and fusion to create one of the greatest jazz-thrash-metal bands Australia has ever produced. The result is captivating and has led to the band becoming one of the most respected and influential acts of the last two decades

Part of the rising cohort of world-class Australian progressive metal, Dyssidia have crafted a unique sound amongst their peers, combining bone-crushing riffs with rich harmonies, soaring vocal melodies with brutal growls and breathtaking soundscapes with intricate rhythms. They are synonymous with blending styles, evoking emotion and bringing a technical edge to their music.

With some of the countries most talented bands supporting on the shows, these rare not to be missed shows are a must.