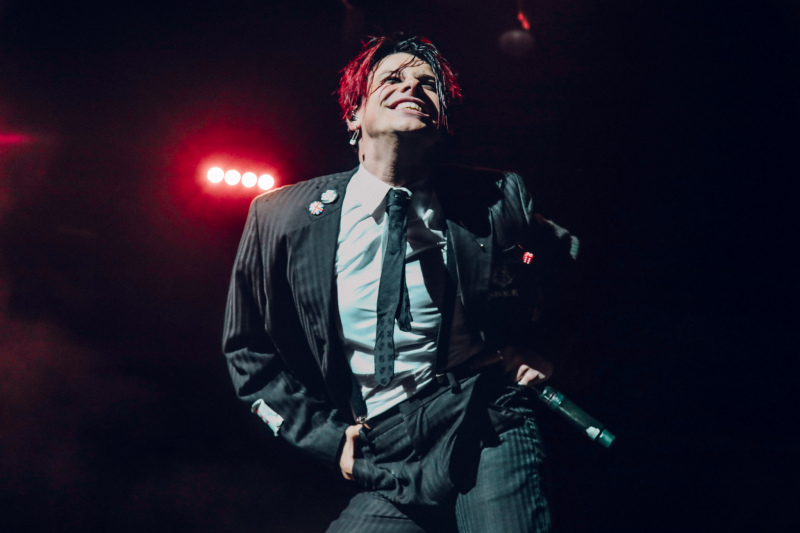 Is there any life on Mars? It’s an age old question asked by scientists and musicians alike, and by the end of tonight we should know the answer – as YUNGBLUD takes to the stage of the Hordern Pavilion for his Life On Mars tour.

The merch lines spilled out into the courtyard as punters were keen to buy exclusive signed posters, insane tour shirts and even rubber duckies sporting mohawks (one of YUNGBLUD’s newest & most unique merch items!). The essence of the misfit community filled the air, as strangers complimented each other’s punky outfits and made new friends with common interests.

We were lucky enough to get a last-minute addition to tonight’s show, as Canadian singer-songwriter renforshort was added as supporting act to warm up the crowd. She told us the stories of her songs, giving us a glimpse into her world with everything from melancholic tracks like ‘i drive me mad’ to sassy earworms like ‘wannabe’. With such a versatile range of emotion and sound for a young artist, the stars aligned when ren performed her song ‘Julian, king of manhattan’ – (an ode to Julian Casablancas of The Strokes) honouring one of her biggest & most treasured musical influences.

A black curtain draped across the front of the stage, and as the lighting dimmed, a pair of bright red lips were projected onto the screen. They began mouthing phrases like “are you ready for the show to begin” and “make some f**king noise!” in a familiar Yorkshire accent, hyping up the audience in preparation for the “fookin’ mental” night that was to come.

A spotlight illuminated a silhouette as the curtain dropped, and the crowd screamed in awe. YUNGBLUD came bounding onto the stage in his iconic punky-schoolboy attire, screaming the intro of his 2020 hit ‘strawberry lipstick’. Fans in the audience instantly began singing along to every word, even shocking the artist himself with how concise our melodic shouting was every time he turned the mic towards us.

It was a refreshing sight to see a performance by someone who was so utterly overjoyed to be here, and humbly stunned at the turnout of the night. He thanked the fans immediately for our support and reminded us to look out for one another as the night got rowdy. The energy only amped up as the opening riff to the high energy hit  ‘parents’ had us all jumping.

As we headed deeper into the nightthings were certainly heating up. Flames began shooting from canons on stage as YUNGBLUD’s ferocious & chaotic energy burst at the seams during ‘superdeadfriends’ and ‘The Funeral’. He reminded us to unleash our inner freak, with a joker-like grin sprawling from ear to ear.

Known in part for his eminent collaborations with musicians like Travis Barker, Machine Gun Kelly & Willow, YUNGBLUD made sure not to leave us without performing fan favourites ‘Memories’ and ‘I Think I’m OKAY’ – even if it meant playing multiple characters, it’s a façade that he does extremely well.

As the night got weird!-er, we all felt right at home as YUNGBLUD brought out an extensive repertoire of Aussie references. From doing a shoey out of his signature creepers, to re-enacting A Current Affair’s iconic Barking Dog Man, to referring to the iconic “bin chicken” as the “grim reaper of birds”, he garnered laughs and cheers from the audience. For an artist that dedicates his song ‘Kill Somebody’ to “Scott Morrison shitting his pants” – it’s no surprise that the goofy singer referred to us as his second home, and oddly he fits right in.

The show was drawing to a close, but we were all still full of energy. From the outstanding efforts to interact with the crowd, to heartfelt speeches about how we are never alone – YUNGBLUD brought a room full of strangers together. Immediately as the band left the stage, we were begging for an encore, and we certainly weren’t disappointed with what we were presented with. Performing ‘braindead!’, ‘god save me, but don’t drown me out’ and ‘Machine Gun (F**k The NRA)’, it was a high-intensity night until the very end.

Tonight’s show was out of this world and we can’t wait for YUNGBLUD to return down under. With the release of his new self-titled album set for September 2nd of this year, we can only hope that the atmosphere of the Hordern Pavilion this evening was enough to sustain the wild alien lifeform that is YUNGBLUD and keep him coming back for more.