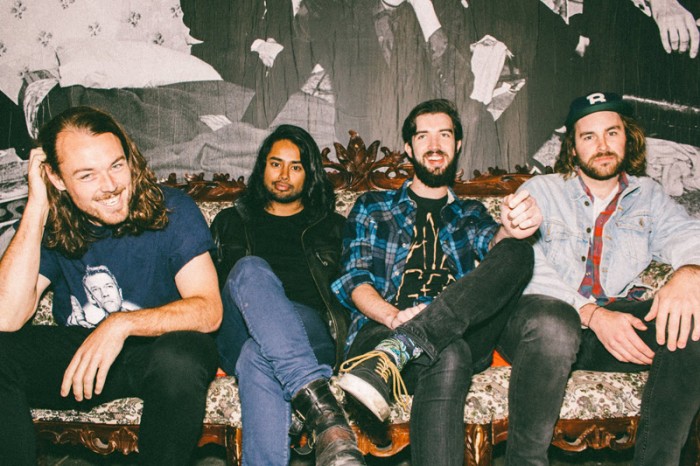 2015’s been a big year for the guys of Going Swimming, they’ve managed to self record their debut album, release it independently to a welcoming reception (including feature album spots) and tour (the majority of) Australia.

t’s obvious that their sound has been sharpened on this debut release and it’s become quite unmistakeable, sure you can hone in on some influences seeping into the work of this Melbourne based band. Hell, even they’d stick their hands up for a few, like Dick Dale and The Cramps. However, once these labels are all filtered through the minds and hands of these four punks, there’s really nothing like it.

They’ve taken the phrase “Monster Punk” as an apt description of their music. Ominous and reckless, that term perfectly describes how Deadtime Stories unfurls like a punk rock version of a Goosebumps novel, lifted with the air of uncertainty, whilst confusing the steps of adulthood.

This is especially true of “Together (To Get Her),” a story of romantic debauchery and the band’s third single taken from Deadtime Stories. The band, who never seem to take themselves too seriously has paired “Together (To Get Her)” with a reckless DIY video clip where the four of them are superimposed into stock footage – much like a Goosebumps novel, you really don’t know what you’re going to get next, except for complete entertainment.

“The video was the brainchild of our mate Michael Woods at Blissington St. Studios,” says Nick of Going Swimming. “He had this green screen idea, so he dragged us into his hot box of a studio on a Sunday afternoon when we were really hungover. Without doubt, there was no place that we wanted to be less. We spent the day pulling stupid faces while he filmed and then he decided to mash us up with a bunch of throwback TV ads and grainy 80s/90s VHS footage. It’s a pretty fun, loose song to play live, so we wanted a video that suited that.”

Sit back and watch Going Swimming endure some wild activities in the clip for “Together (To Get Her),” and don’t forget to catch them one last time this year, supporting The Cops (remember The Cops!?) at The Old Bar, Saturday December 5.

Deadtime Stories is out now.