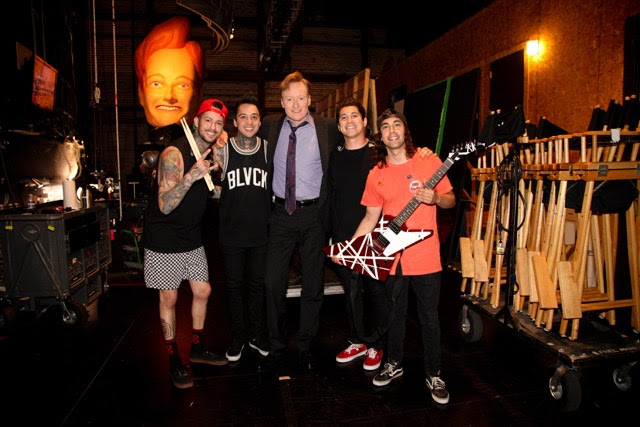 Pierce The Veil made its late-night television talk show debut on “Conan,” performing their hot new single Circles.  The band wrapped its sold-out U.S. “Misadventures Tour” on Sunday night, and heads to South America, Mexico and Australia next month.  Pierce The Veil’s new album, Misadventures  was released May 13 and debuted at #1 on Billboard’s Alternative, Rock, Hard Rock and Independent charts and #12 on the Australian ARIA chart.

Check out the band’s performance on “Conan”

Pierce The Veil have released a video clip that tells the story of the inspiration and recording of their new single Circles. Check out the video below.

Inspired by last fall’s horrific terriorist attack in Paris, Circles tells a hypothetical tale of two friends at the Eagles of Death Metal show and how they tried to save each other as the onslaught was taking place. “I watched the Eagles of Death Metal talk about what happened,” said Pierce the Veil’s lyricist Vic Fuentes. “They said a lot of people died trying to save their friends, and that just really affected me, thinking about these kids at a rock show trying to save their friends.  And I realized that could have been our band or any of our friends’ bands, and the whole situation really hit me hard.”.

The San Diego natives are making an eagerly-awaited return to Australia in August to celebrate the release of their highly anticipated album, Misadventures, touring nationally with special guests Silverstein, Beartooth and Storm the Sky joining them on all dates.