Over the past two years, VISIONS has built a solid reputation in Sydney for their regular club nights – opening their doors for free to music lovers of the inner west, and hosting some of Australia’s best up and coming talent. Now VISIONS is taking the next step – announcing the launch of a monthly VISIONS MELBOURNE, and the first line up of acts playing the VISIONS stage for the 2016 KINGS STREET CRAWL.

​VISIONS has hosted over 30,000 punters in its first two years across a variety of 250-500 capacity venues in Sydney. Highlights at VISIONS have including sets from The Preatures, Kirin J Calinan, Deep Sea Arcade, Montaigne, and The Creases, as well as after-parties for DMA’s, DJ sets (SPLASHH, DZ Deathrays, Bluejuice), a launch party at Australia’s largest music conference, BIGSOUND, and main stage festivities at King Street Crawl in Newtown in 2015. In September 2015, VISIONS was also invited to curate the opening slot at Small World Festival, and most recently had its own multiple venue festival as part of Vivid Sydney, the world’s largest festival of light music and ideas.

As part of this year’s King Street Crawl VISIONS will host the main stage festivities at Waywards for the second year running. Curated by members of Deep Sea Arcade, the event aims to put together progressive line-ups of exciting local acts who are pushing boundaries in psychedelia, garage-rock, electronic and everything-alternative.

The first announcement for the VISIONS stage of King Street Crawl features an outstanding line up of Australian artists including:

+ still to announce a very special headliner, and even more acts! 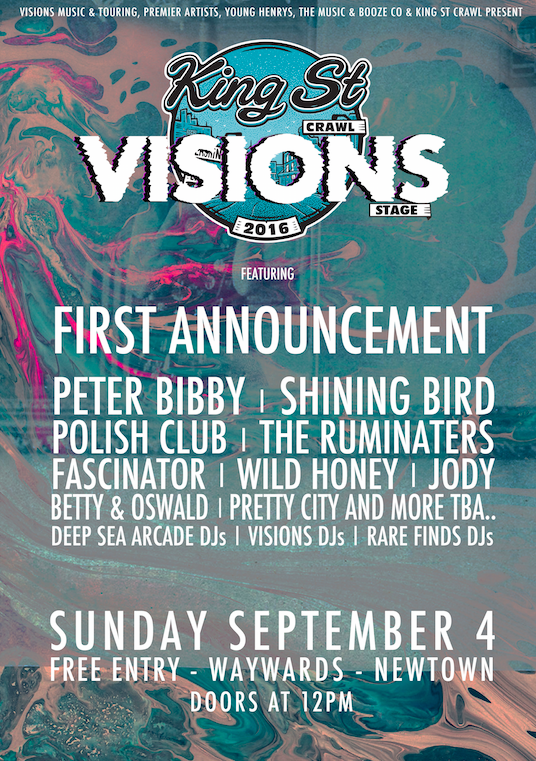 The King Street Crawl aims to celebrate the diversity of Newtown’s King Street, and for one day link all of these varying business in one long musical crawl up and down King Street and Enmore Road. Inspired by the South by Southwest music conference in Austin Texas, which transforms the city’s main road and the multiple bars and restaurants in and around 6th Avenue into one huge revolving music venue, the King Street Crawl aims to do likewise working with the Pubs, bars, restaurant and shops of Newtown.

The aim of the King Street Crawl is to shine a spotlight on Newtown and the varied establishments that make up this unique bohemian corner of Sydney, and give musicians of all levels and genres a wonderful platform to showcase their talents. A true melting pot which celebrates diversity and prides itself on being the stomping ground for some of the most exciting emerging, and established musicians in the country. This isn’t a music conference, just simply a day that celebrates music and Sydney’s inner west.

The second exciting announcement from team VISIONS is that they will be launching their successful monthly music club night in Melbourne at Yah Yah’s on the same weekend, in collaboration with Premier Artists andTone Deaf, the first ever VISIONS MELBOURNE will kick off on Friday September 2nd with an outstanding line up of Australian talent:

“We are incredibly excited to be launching Visions in Melbourne. For years it has been a dream of ours to set up a national touring circuit which premiers fresh talent from Australia and abroad.Today that has become a reality.”  – Nicolas McKenzie (Visions) 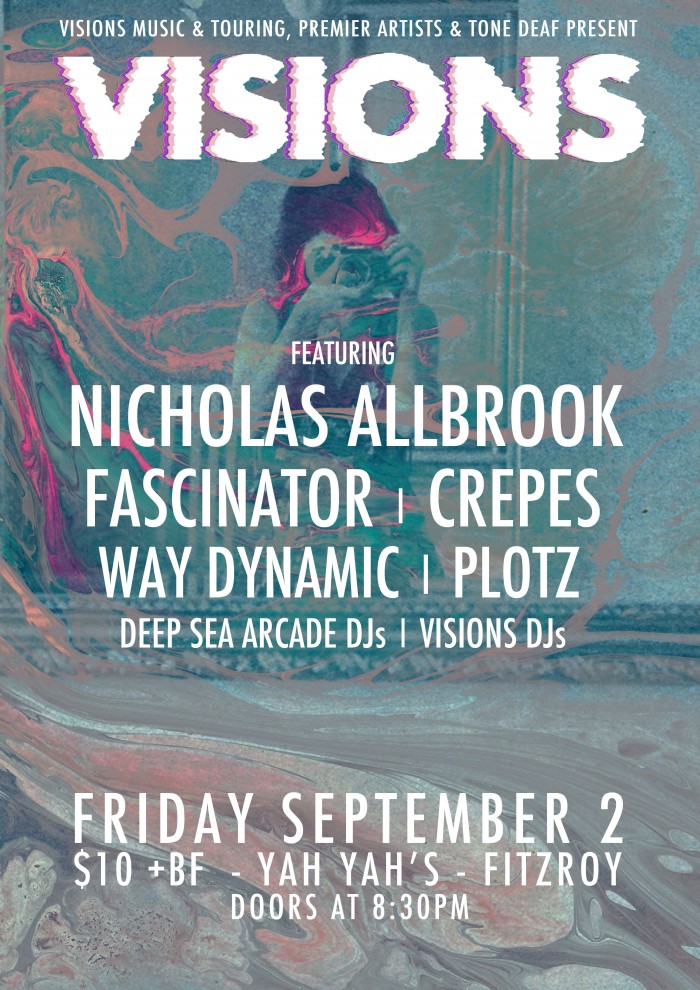