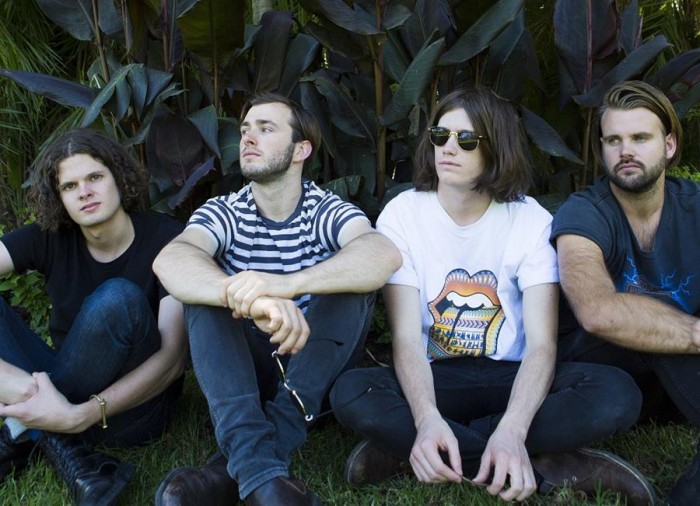 UPSKIRTS are stoked to announce the release of their new single “Nothing Happens in Roseville”, an intense, slow-burner plucked from the groups forthcoming, third EP, ‘Barely Moving’ set for release on Friday May 29 via Inertia Access.

Listen To “Nothing Happens In Roseville”

“Nothing Happens in Roseville” is about growing up in a disinfectant commercial. The song builds around a slugging twelve-string guitar and a reverberated drum loop while Tom Kell (singer/drummer) laments the dissolutions involved with past years spent living within the white, picket fence illusion painting a shiny veneer over life’s objective truths.

“Roseville is an exceptionally beautiful suburb that some of us grew up in,” Kell says, “I feel privileged to have called it my home, but it’s so far removed from the world I’m now a part of – what seemed normal for me when I was a kid now seems so unreal. Bad shit is going on everywhere, inequality, exploitation, damage and suffering – but nothing ever seemed to happen in Roseville.”

It isn’t so much a political song as a personal reflection of privilege and escapism. “It’s over my head/It’s out of my hands,” croons Kell over and over again while creamy fuzz guitars, and drums belt around him.

The song soon melts from its spacious psychedelic twang into a wall of sound where Kell yelps, “It’s over my head/it’s out of my hands/if you remember/ it’s fallen apart in the past” over a cacophony of Smashing Pumpkins fuzz and wailing guitars.

“Nothing Happens In Roseville” was recorded between Defwolf Studios and Studio 301 in Sydney’s Inner West with Tim Carr (Ernest Ellis, Matt Corby), who worked with the band on their previous two singles “Mind’s a Burden” and “Where”, and most of the forthcoming EP.

‘Barely Moving’ is out Friday May 29 2015 on Inertia Access and “Nothing Happens In Roseville” is available to purchase via iTunes.