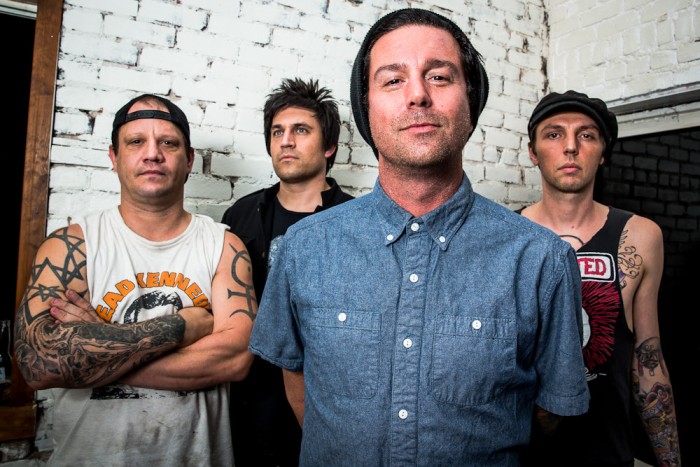 With a genesis at the dawn of the 90’s, it was 1994’s Blue Room album that changed everything for the then emerging California hopefuls. Released by local label Red Eye Records, it established Unwritten Law’s early sound of fast-paced punk rock and gave them the opportunity to build their reputation by playing local shows in and around the San Diego area. White-hot songs like “CPK,” “Shallow,” and “Suzanne” would become favourites with local fans and would remain in their live set for years to come. Blue Room was the album that brought Unwritten Law from the punk rock wilderness into the gaze of the wider music world changing their collective destiny in the process.

From this point and over the course of 6 more albums including 1996’s Oz Factor, 1998’sUnwritten Law (aka The Black Album), 2002’s Elva, 2005’s Here’s to the Mourning and their most recent album Swan, Unwritten Law have generated a musical legacy full of memorable anthems and highlights. Songs like “Celebration Song”, “Save Me“, “She Says”, “California Sky”, “Holiday” and “Cailin”, amongst many others continue to quicken the pulse at live shows to this day and have cemented the band’s longevity and status as major and much-loved players in the world of melodic punk rock.

With Elva, the band moved away from their previously established punk-rock formula and towards a more accessible hard rock sound – finding success with the song ‘Seein’ Red’ which reached #1 on US modern rock charts.

Elva hits the audience with all sorts of styles – formulating a winning combination of rhythm, gentle vocals, hard guitar and compelling lyrics. Don’t miss UL in all their glory this December, playing Elva in full.