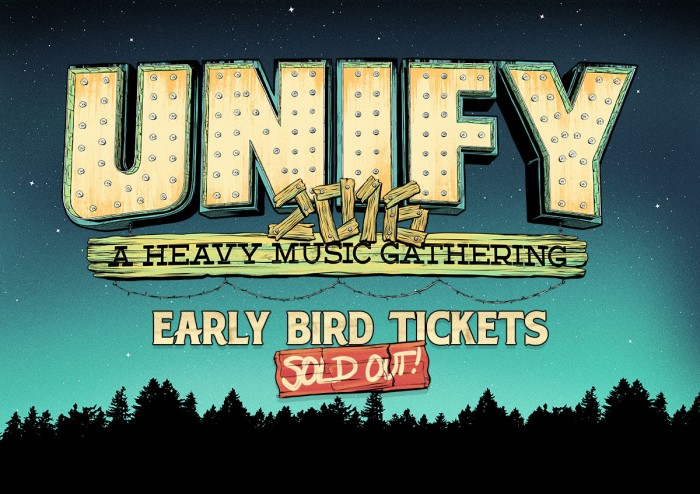 After being on sale for under three hours, UNIFIED and THE HILLS ARE ALIVE are extremely proud to announce that the early bird ticket allocation for UNIFY 2016 has now completely sold out. Any 2015 attendees who missed out on these tickets have another chance to secure passes when the general public allocation goes live on October 1.

The inaugural UNIFY Gathering was held in January this year and was a massive success, selling all 3000 tickets in just three hours. Billed as Australia’s first camping festival for heavy music, UNIFY have been praised for its well planned site and extra attention paid to ways to entertain punters. With mini-golf, a cinema and massive board games around the site, great food carts and band-themed novelty cocktails, fans had plenty of ways to stay entertained over the weekend.

2016 is due to be even more special with the inclusion of three international bands who will join the cream of the crop of Australian heavy music artists. The full line up will be revealed on triple j on Friday September 25
UNIFY is a two day boutique camping and music gathering set in the beautifully picturesque pastures of South Gippsland, a relaxed 2 hour drive from Melbourne. The site is set across a secluded Recreation Reserve surrounded by Greenery and just a short 10 minute drive from the ocean.

The concept is to create a community driven event of 5000 punters across the Punk, Hardcore and Metal world, with a lineup that showcases the quality and diversity of our heavy music culture. The site includes a camping area, full Stage and Production setup, BYO and licensed areas, and a punter friendly atmosphere.

Watch the video below to watch a retrospective video about this years UNIFY Gathering.