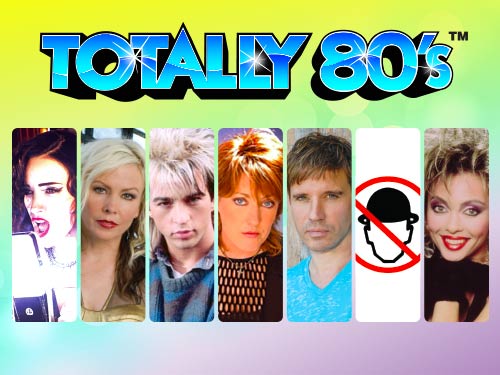 TOTALLY 80’s Stars 7 International 80’s Superstars – MARTIKA, BERLIN, LIMAHL of KAJAGOOGOO, PAUL LEKAKIS, KATRINA (ex KATRINA & THE WAVES), MEN WITHOUT HATS & STACEY Q will be together – live in concert – to perform all of their classic hits. Sharing the stage with them will be 2 of Australia’s own Countdown Favourites WA WA NEE and REAL LIFE!

Whether it was her synth-dance songs or power ballads, there’s no doubting MARTIKA(USA) was a great singer. At TOTALLY 80s she will perform all of her biggest Australian hits including the #1 smash Love… Thy Will Be Done (written by Prince no less), the almost #1Toy Soldiers as well as I Feel The Earth Move and Martika’s Kitchen. This will be only the second time MARTIKA has toured Australia, the last time being 1991!

Let by Terri Nunn, synth-pop/ new wavers BERLIN (USA) will take you back in time to that steamy scene from Top Gun when they perform their Australian #1 Take My Breath Away(writer Giorgio Moroder said that he is most proud of this song, of all the other hits he has had) plus their other fantastic Top 40 Hits, including No More Words, Dancing in Berlin as well as the seminal, Metro (which has been covered by everyone from System of a Down toAlkaline Trio). This will be BERLIN’s first tour of Australia since 1984!

The original duotone spikey mullet man, LIMAHL (UK) was, oh, so much more than his legendary hair; the band he fronted KAJAGOOGOO were responsible for the 1980’s Nick Rhodes (DURAN DURAN) produced classic Too Shy (which peaked at #6 on the Australian charts.) LIMAHL immediately found solo success with his smash hit Never Ending Storygiving him another Top 10 hit here. This will be the first time LIMAHL of KAJAGOOGOO has ever toured Australia!

PAUL LEKAKIS (USA), the man who like a fine wine only gets better with age, had one of the biggest hits in 1987 with Boom Boom (Lets Go Back To My Room). This 80’s dance-pop gem was an Australian phenomenon and stayed at #1 for 5 weeks! This will be the first time Paul has ever performed in Australia!

KATRINA (UK) ex KATRINA & THE WAVES had one of the biggest 80’s hits with their power pop classic Walking on Sunshine reaching #4 here, it’s second highest chart position in the world only behind Canada. KATRINA was last here in 1987 as part of the Countdown Spectacular.

One of the most memorable videos from the 80’s was for Canada’s MEN WITHOUT HATSfor their mega hit Safety Dance. It has stood the test of time and remains one of the quintessential 80’s songs that always makes you smile! This will be the first time MEN WITHOUT HATS have ever performed live in Australia!

The Queen of retro / electro dance, STACEY Q (USA) stormed the Australian charts in 1986 with her debut single Two of Hearts reaching #8. Her follow up single We Connect was another great slice of hi-nrg dance music and reached #6 here. “Long live the 80’s and Stacey Q” indeed!

WA WA NEE came of nowhere in 1986 and scored an Aussie #1 with their debut single Stimulation. They followed it up with 2 more Top 10 Australian Hits – Sugar Free and I Could Make You Love Me.

What a line-up! What a night! So many 80s classic songs all performed live by the original artists! TOTALLY 80’s will be a night to re-live some of the decade’s biggest smash hits, (safety) dance moves and musical memories.

Tickets on sale NOW from: http://www.metropolistouring.com/totally80s 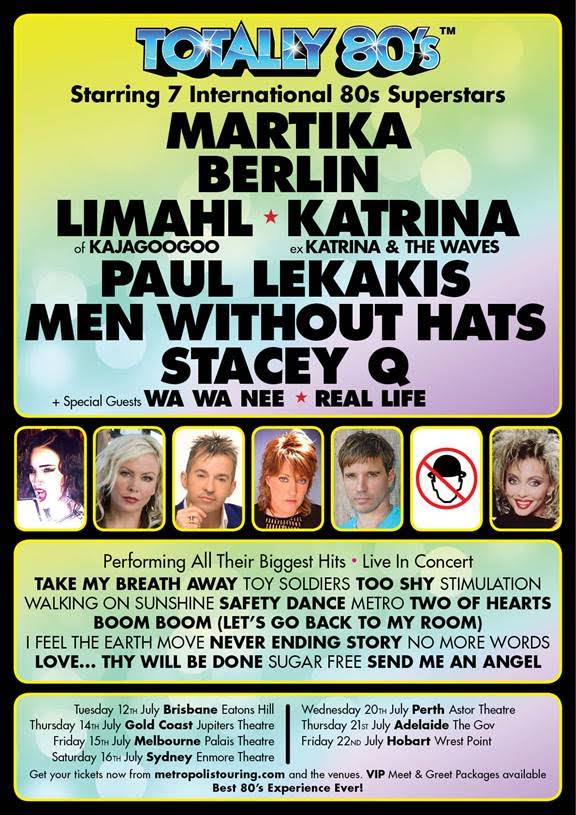