California’s biggest rock festival will feature over 35 bands on three stages at Discovery Park, conveniently located near downtown Sacramento, where the American and Sacramento Rivers meet. The current daily music lineup for Monster Energy AFTERSHOCK is as follows:

Monster Energy AFTERSHOCK tickets go on sale Wednesday, June 8 at Noon PT atwww.AFTERSHOCKConcert.com. Tickets are limited and will go fast. Fans are encouraged to buy early so they don’t miss out on the chance to see so many iconic rock bands at one American festival. See below for details.

Monster Energy AFTERSHOCK is also offering a Park & Ride shuttle program this year, since parking at Discovery Park is extremely limited. Each Park & Ride ticket includes parking for your vehicle at Sleep Train Arena and a non-stop shuttle directly to the festival site. Festivalgoers are encouraged to carpool to Sleep Train Arena and save. For pricing and more details, visit www.AFTERSHOCKConcert.com. 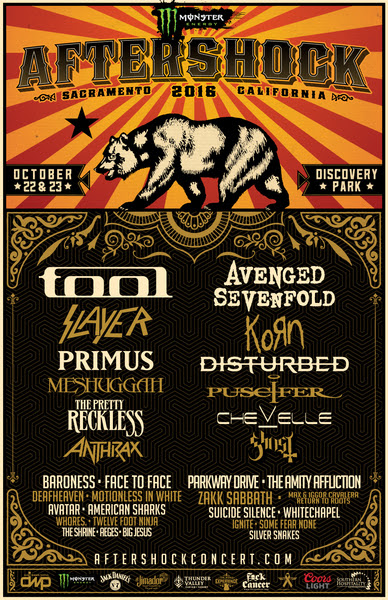