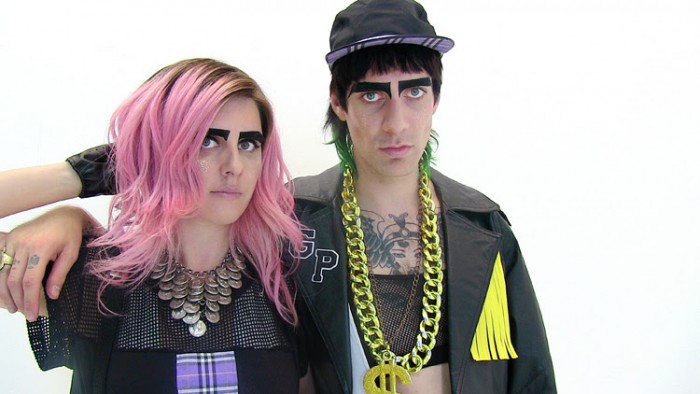 The Gooch Palms love pop. It’s no secret. Leroy is well known to burst into random pop songs mid-set and if you’ve ever been to one of their DJ nights you’ve danced to some bangers care of their expansive music collection. But now it’s The Gooch Palms themselves that are releasing their very own pop banger.

Not afraid to try something unexpected, The Gooch Palms have graced us with their new single ‘Slow Burner’. It’s one of 13 songs the duo have recorded with producer Bill Skibbe in the USA and it’s vastly different to the other new tracks or anything they have released previously.

“We went into the recording studio with totally open minds and a few unfinished ideas and Slow Burner came out of one of those ideas” says Kat. “We had so much fun making it and pushing the boundaries of what we can achieve as a two piece but always keeping it so we could play this one live as well. It’s kinda different but we wanted to just throw it out there into the world to see what reaction it gets.”

As the song’s title and lyrics suggest, this one could take a while to sink in, but The Gooch Palms are confident that it will sink in… “it always does”. Their debut album Novo’s being a good case in point; the first US release will come out on cassette courtesy of Burger Records on September 25 and European label Surfin’ Ki Records will reissue the vinyl in October, both releases come two years after it’s initial Australian release back in 2013.

The proud Novocastrians have been living in Los Angeles since March and are very quickly making a name for themselves stateside. They have played over 70 shows across the country since arriving in the USA and are showing no signs of slowing down.

They won’t be gone forever though, they’re headed back to Australian for a visit and National tour in early 2016, full dates below!