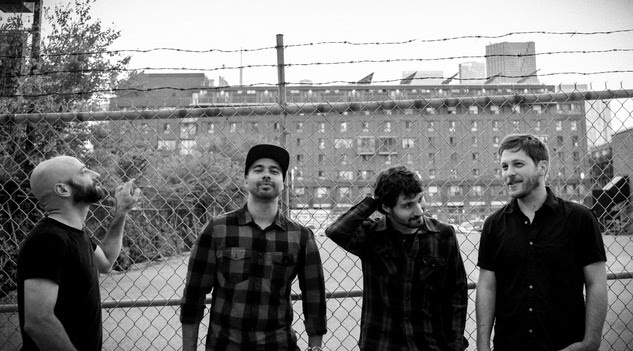 The Dying Arts have just announced they have signed to Toronto-based indie label Culvert Music.  A new EP titled You Had It Coming will be available worldwide on October 23, 2015. The band premieres the ferocious lead single “Liar” today at iTunes and streaming on Spotify and Rdio. To get a sneak peek of the upcoming 6-track EP, check out the track here. The band is slotted to take the Radicals Stage at Riot Fest & Expo Toronto at 5:00pm ET on Sunday, September 20.
Since dropping their self-titled debut EP in 2014, the Toronto-based foursome – guitarist/vocalist Mike Portoghese, bassist Simon Poole, drummer Joe Torchia, and guitarist Daniel Scuglia – has seen their profile surge at same rate as their van’s odometer thanks to their now-signature blend of riotous punk with bits of post-rock and indie.  With You Had It Coming, the band perfectly embodies the spirit and substance that they exude onstage; an urgent, unrelenting swagger reminiscent of early-90s Sub Pop and Dischord roster staples that’s caught – or rather demanded – the attention of tastemakers and discerning devotees alike.
Owing to their unique, combustible cocktail of influences, The Dying Arts can chameleon their way onto a virtually endless array of shows. From punk stalwarts like Anti-Flag and Good Riddance to heavier outfits like Protest the Hero and Grade to their contemporary peers in Single Mothers and The Motorleague, The Dying Arts have played alongside them all and converted many of those fans into followers of their own.
THE DYING ARTS PERFORMS AT RIOT FEST & EXPO TORONTO SEPTEMBER 20