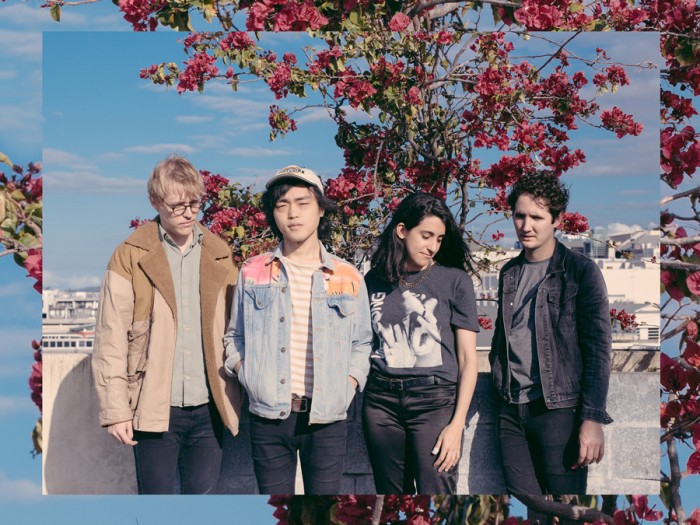 Fear not, the jangly garage pop of Tempura Nights has returned and their latest offering is a one-minute-thirty, utter banger, titled ‘Studville’.

On 2014’s debut release Whine EP, Tempura Nights’ Alice Rezende sang about being vegan everyday with Alicia Silverstone; it was a deliciously witty form of painful retrospect. On this latest single, she makes similar gestures toward strained relationships, but in this instance of being a stud to hold someone up, ‘I wanna be your fantastic stud’.

The outfit are part of the thriving Brisbane scene, which always seems to fit so tightly together; Rezende describes herself as a “miserable teller” by day and freelance graphic/web designer by night, she’s the genius behind Tempura Nights’ art. While drummer, Jake Knauth owns a ridiculously tasty fried chicken street-food business, bassist Andre Johansson-Walder records, mixes and produces all of Tempura Nights’ tracks, along with other local notables; The Creases, The Goon Sax and The Good Sports, and then there’s guitarist Harrison Tang who’s in Emerson Snowe – the side project of Jarrod from The Creases.

Tempura Nights have been churning out their garage rock milkshakes with sprinkles of jangle pop since beginning as more of a joke to blow off steam from their other bands (Go Violets, Major Leagues, The Good Sports). Previous tracks like ‘RIP CHIX‘, ‘Brainroof‘ and more recently ‘Mr Tone‘ have spiked the attention of publications like The Vine, Indie Shuffle and Pile Rats, and found them on numerous support slots for some top international artist including The Courtneys, The Drums, Tonstartssbandht and Tomorrows Tulips.

Their latest single, ‘Studville’ continues to mix influences from snotty punk to ethereal pop and defiantly challenge song structures; they cut all the fat on ‘Studville’, pushing out only the necessary verses and instrumentals; it only clocks in at one minute thirty, but they sure as hell make sure each second counts.
~ headed to BIGSOUND? catch them play Rics Bar – Wed 9/9 at 9pm – 9:30pm ~