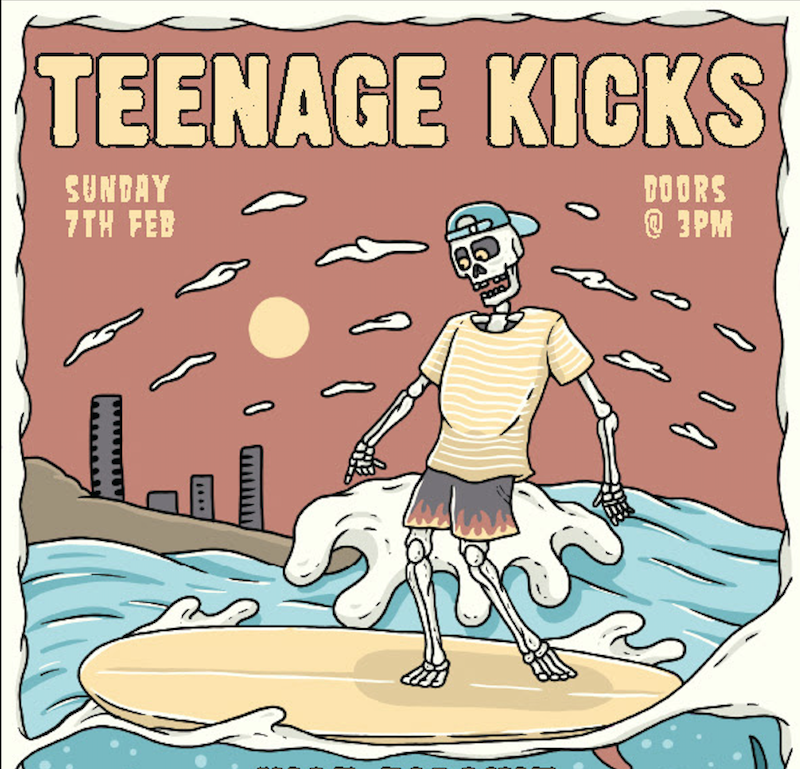 The team behind Best Night Ever have pulled a bunch of rad bands together for a mid-summer Sunday Session mini-fest to present Teenage Kicks at Burleigh Bazaar on Sunday 7 February.

Spending 2020 slow-cooking a flavoursome psych-rock stew, Brisbane’s’ Nice Biscuit, return to the Goldy with their new single ‘Fem Chem’, and a new EP titled “Create Simulate” due to satisfy your hungry ears in early 2021.

Joining them on the drive down the M1 from Brisvegas, Concrete Surfers are a Brisbane band to the core and create a unique blend of garage-rock and pop.

Hailing from the nation’s capital to make their first-ever Gold Coast appearance Teen Jesus & the Jean Teasers are a band of four nineteen year old gals with a penchant for plaid and a knack for crafting gritty, nostalgic grunge pop.

Since Teenage Joans first burst onto the stage only one year ago, they have left every room they play full of brand new and soon-to-be long-time fans. This year the triumphant indie/pop-punk two-piece took home the crown as triple j Unearthed High winners of 2020 and aren’t planning on slowing down anytime soon.

Coming in hot from Jervis Bay, NSW, Debbies are a two-piece rock band with a sound that combines those summery slacker vibes with upbeat hard-hitting rock melodies.

Looking for all-female, all punk rock, all the time? You can’t go past the 5 piece powerhouse of Being Jane Lane! Dropping catchy punk rock tunes with attitude, if you haven’t yet jumped on the Being Jane Lane bandwagon, now is a damn good time to do so.

To join the other ladies on stage, will also be Gold Coast local Lily Papas. The singer-songwriter has been known with her introspective indie pop, noting musical influencers fromFlorence & The Machine, Lana Del Rey, London Grammar and David Bowie.

Tickets are now on sale via Oztix and is a 16+ event.