Sydney will be ska’d for life when this crackin’, skankin’ line-up of heavyweights take centre stage to battle it out for Ska supremacy at Sydney Uni’s Manning Bar on Friday March 6.

Bigger, bolder and brassier than ever, the most successful ska act in Australian history, The Allniters, are still ‘allriters’ decades on from turning the 80s live music scene into one rude, raucous party with their stomping rhythms and contagious sense of fun. The whole nation caught the Ska bug as their album D-D-D-Dance went gold after two weeks and hits like Montego Bay topped the charts. The Allniters have lost none of their upbeat energy, and the 2015 line-up features most original members from a band of 10!

Bringing serious grunt to the bill, The Porkers are in rip-snorting form and ready to take on The Allniters. They’ll be coming at us with the ‘wall of noise’ they’ve brought to Soundwave 2014 and other festival stages around the globe since spearheading the ‘third wave of Ska’ in the late 90s. The Porkers pack a punch with their skanky Jamaican rhythms and melting pot of Reggae fused with Funk, Punk and Metal riffs, sometimes all in the same song! Just add beer to the super-energetic stage show from the men of pork.

The OzSkas rockin’n’skankin your socks off with their kick-arse brand of Ska/Rocksteady/Reggae. You can’t sit still once this six-piece hit the stage to pump out their explosive mix of classics and originals, with a line-up featuring some of Australia’s most respected names in Ska and Reggae. But can they out-skank their opponents, Project Collective Ska? Influenced by 60s Jamaican Ska, this Sydney nine-piece features a blazing horn section and crazy rhythms that never fail to get the crowd jumping. DJs Wally Wally and Prince Vince will keep the party jumping in between acts. 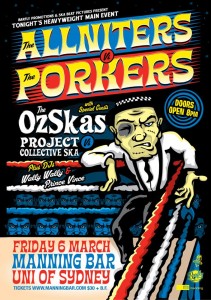