Canadian metallers STRIKER have released a music video for Too Late, taken from their forthcoming album Stand In The Fire
The bands guitarist Tim Brown said of the clip, For this video we wanted to channel the essence of Bon Jovi, but with less hairspray and more metal.  It’s hard to go wrong with a well done performance video, and we decided to put a modern twist on it with all the slow motion, colour, and moving lights in the background. We like to bounce back and forth between the high concept videos like our Keg Monster videos and simpler things like this; we need to show people what it’s like at a Striker show! More pyro next time I swear!”
Watch the clip here:

Full Pre-order details can be found at www.striker-metal.com

Stand In The Fire is STRIKER‘s most uncompromising record to date. A record packed with incredible riffs and colossal anthems, all laced together with epic harmonies.  Inspired by legendary bands like Iron Maiden, Striker wear their hearts firmly on their battle jackets, soaking up the power and influence of classic rock and metal.

“We’re so excited about having our music, our ideas, and our future in our own hands – ushering in a new era for the band of decisive action, dedication and forward thinking. 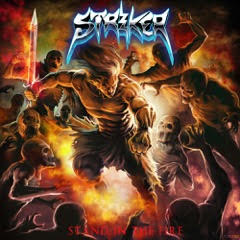