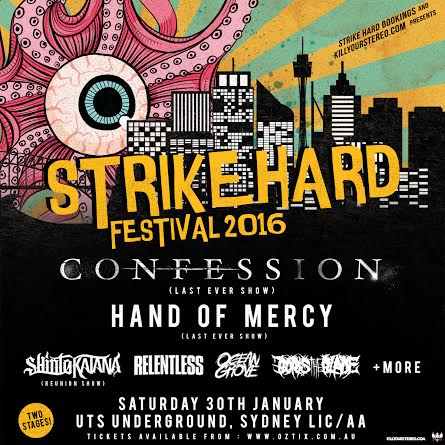 Just as 2016 begins to gather steam, it will bid farewell to two of Australia’s most influential, iconic and brilliant bands and also welcome one back!  Strike Hard Fest will be the last ever time that the legendary Confession and live scene staples, Hand Of Mercy take the stage.

Since forming in 2008 Confession have reached a level of success only few others have. Album of the year, international tours, festival appearances, their fair share of controversy and so much more. With nothing left to prove, Crafter and the boys are signing off and going out on top.

DIY road dogs, Hand Of Mercy have equally paid their dues, gigging relentlessly, releasing constantly and forging their own path. They’ve always done things on their own terms and that includes knowing when it’s time to move on. It’s time.

While Strike Hard Fest is a chance to say farewell to two greats, it’s also a cause for celebration with Sydney mosh metallers Shinto Katana coming hibernation & playing a one off reunion show.

Strike Hard Fest will play out over two stages and is a Licensed All Ages event with pass outs available. Get in quick, as tickets will sell out fast!

Tickets on sale Friday 4th December at 9am

Hand Of Mercy (last ever show)

Justice For The Damned