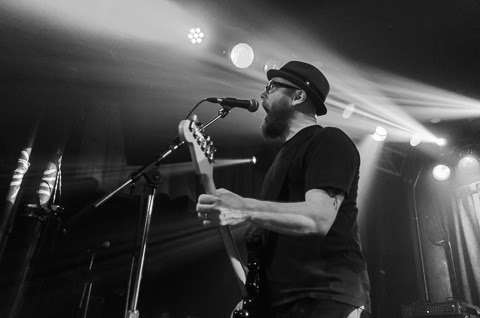 Josh Caterer has announced a new band, Jackson Mud, playing the electric blues he grew up with in the Chicago suburbs. The band formed in early 2015, with Caterer writing a batch of blues songs in January, inviting friends to help with arrangements and demos. Excitement ignited as the material shaped up, so they began booking shows and recorded Down Time Blues, their debut EP, out June 10th on iTunes and available on CD via Artistic Integrity Records. Caterer explains, “These songs are really an extension of the kind of songwriting I’ve always done for the Smoking Popes; very personal songs about the complexity of relationships, the emotional roller coaster of love. Blues music is the perfect medium for expressing those things. I see Jackson Mud as a natural progression from the Smoking Popes. When the teen angst of punk rock grows up, it turns into the blues.” The band includes Caterer on guitar and vocals, Ronaldo DeSouza on piano and keyboards, Ray Somera on bass and David Benkert on drums.

Fans who’ve listened closely to the Smoking Popes and Duvall over the years heard Caterer’s undeniably soulful vocals but may not have identified their roots, but he traces them back to his childhood, saying, “I’ve loved the blues ever since I was a kid. My dad had a very extensive record collection, including a lot of blues, so I grew up listening to Muddy Waters, B.B. King and John Lee Hooker…all that stuff was burned into my heart at a very young age. Eventually, my music career took me in a decidedly non-blues direction with the Smoking Popes, but over the years we were always jamming the blues in rehearsal and sound check, just for fun. So really, I’ve been playing blues guitar most of my life, just not in front of an audience. But I’ve always had the idea that someday I was going to get a real blues band together.” Caterer’s guitar work has long been under-rated, Jackson Mud gives him the opportunity to showcase stellar blues chops. Substream