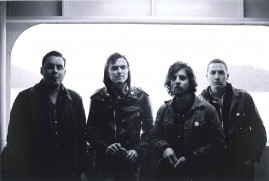 Hailing from the cold, industrial city of Edmonton in Alberta, Canada, Slates are a straight up punk
band. Not fashion driven, screaming for the sake of it, look at my tattoos, scene punk – but real, gritty,
we live in this city and it lives in us, straight up no bullshit punk. They are 100% a product of their
environment.

Since forming in 2008, they have been on a non stop recording and touring cycle that has seen them
play everywhere and anywhere, including places no one really imagines bands go to play like Cuba,
Bosnia and even the Yukon Territory.

With two albums and three 7 inchers under their belts, Slates signed to Canadian label New Damage
Records for their third full length album, Taiga, which was released in early 2014. It was produced by
the legendary Steve Albini who recorded it on tape, sans effects and in the unique acoustics of an
old pinball factory converted to a studio, to best capture the bands ferocity and rawness as only a
producer like Steve can.

Their relentless touring schedule has only now allowed the band described as Edmonton’s answer to
The Replacements to visit their fans in Australia.
Slates will be in Australia for most of February, playing 11 shows across all capital cities and some
key regional areas. Choose your venue and prepare for a night of snarling, socialist punk. The band
have booked this tour themselves in a total DIY way. Such is their work ethic.