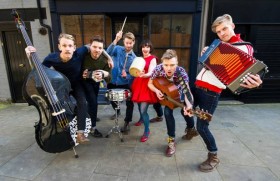 Skinny Lister are no strangers to the world’s stages – having performed on the main stage at Coachella and Fuji rock, toured the States supporting Dropkick Murphys and wowed audiences at USA’s prestigious Bonnaroo and Summerfest festivals. Back on home soil the group rocked the Avalon stage at Glastonbury, the main stage at Wickerman Festival, Cambridge Folk Festival, BoomTown Festival and Beautiful Days.

They’ve held gigs in Land Rovers. They’ve sung while wing-walking. They’ve toured in a narrow boat and wherever they play their lusty shanties, punk folk roar-alongs and crazed whirls of love, fighting and hardcore drinking. Be it festival camp-fire, pub snug, Vans Warped Tour or to 5000 people crammed into a tent at Fuji Rock – you’ll find them out dancing with the crowd.

Max and his singing and dancing sister Lorna were brought up in a folk music family, their father George – a folk music radio DJ – taking them to art fairs and folk events as kids to try to rid them of their bump’n’grind tendencies. It worked: as they hit pub-going age, they began learning to play jigs and reels on the accordion so they could play with their dad, in the classic tradition, over foaming pints. They even formed an Americana bluegrass family band, playing Christmas festivals and pub shows.

Meanwhile, fishmonger’s son Dan was busy moving to Greenwich from the East Yorkshire fishing town of Bridlington, his head full of shanties, and infiltrating the local folk scene. That he was a fishmonger’s son rather than from trawlerman stock didn’t stop him having the seafaring songs in his soul. Hooking up with Max, the pair began playing traditional folk reels in Dan’s front room around 2009 on guitar and squeezebox, then graduated to playing the pub next door. Soon Lorna saw her chance to get into festivals for free by joining them as their singing dancer, and alongside guitar and concertina wielding Sam ‘Mule’ Brace, and double bass playing Dan ‘Tash’ Gray, the five-headed dervish known as Skinny Lister burst jigging, swilling and ‘arrr!’ing from the very heart of the celebratory folk tradition.

Skinny Lister spent 2014 touring with the likes of Dropkick Murphys and Boy George in the run-up to ‘Down On Deptford Broadway’. As they whip up this new urban reel, expect glorious chaos.

view ‘Cathy’, which is set to be the next single