Canadian post-hardcore pioneers, Silverstein return to Australia with their first show TOUR STARTS SUNDAY! THIS Sunday, May 3 in Brisbane.

Silverstein are celebrating the 10th anniversary of their breakthrough album Discovering The Waterfront which they will be playing in full along with their greatest hits as well as some new stuff from their soon to be released I Am Alive In Everything I Touch album which comes out on May 19 via Rise Records.

Joining Silverstein for all shows are Melbourne DIY metalcore machines, Dream On Dreamer and Brisbane’s Young Lions, plus a cherry picked list of local acts will be opening shows in their home cities.

Get set to experience Silverstein like its 2005 all over again! 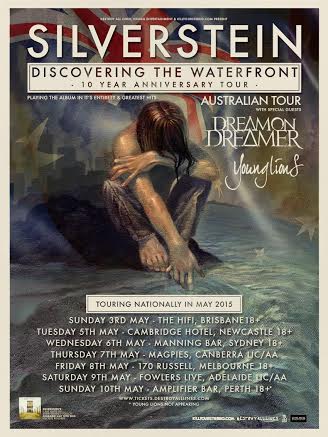