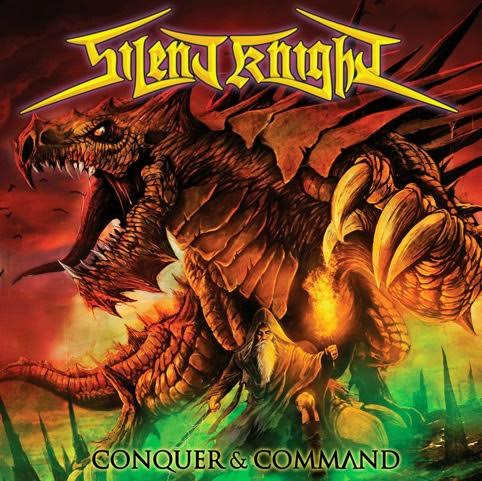 Featuring 9 studio tracks, including Prisoner Of Your World, (which was the lead track on 2014’s Power Metal Supreme EP) and Empty Threat, the album will also feature the spectacular cover of Europe’s The Final Countdown, a fan favourite during the band’s live performances.

To support the release of Conquer & Command, Silent Knight will be hitting the road in October for a run of dates around the country which will see them headline the Daimonous Open Air Festival in Bali, Indonesia
and play main support in their hometown of Perth for German Power Metal legends, Helloween.

Conquer & Command’s stunning cover-art has once again been handled by European designer, All Things Rotten and will also feature on the bands accompanying tour merchandise

Silent Knight are partnering with Pledge Music for their album pre-sale campaign which will not only give their fans first access to the album and signed merchandise, but will also make exclusive items available and allow fans inside the studio with regular video & photo updates as the recording progresses.

Original founding member Paul Wrigley has returned to the band on drums with a fresh drive and renewed desire. Having left the band in January 2014 to conclude his university education, Paul has been working hard behind the scenes and is excited and ready to get back on stage for the upcoming tour.

Conquer & Command will be available on CD, Digitally and as a limited edition, hand numbered and signed cassettes!