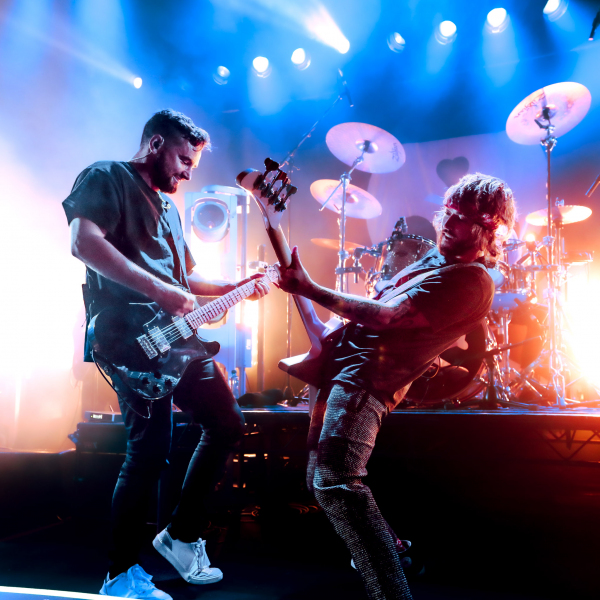 Back in 2009 Short Stack emerged onto the Australian music scene releasing their debut album Stack Is The New Black. With tight black jeans and big hair they quickly shimmied their way into pop music loving teens hearts across the country.

Now fast forward to 2022 and after a few tour setbacks the boys are back. After already conquering stages in Newcastle, Canberra, Brisbane and Melbourne tonight it’s Sydney turn as we are here to watch them play the first of three shows at the Metro Theatre. Having just released their new album Maybe There’s No Heaven combined with live music finally returning to the stages of Australia there’s a lot to celebrate tonight.

First up on stage were Perth duo, Those who Dream. This two piece exuded a youthful energy that helped to get the party started. Their upbeat, catchy tunes were accompanied by permanent smiles from the band members who were having the time of their lives hyping up the crowd.

Next up, the time had come for a performance that we had personally been waiting a long time for. Melbourne pop punkers Between You & Me took out our SCENEzine Number 1 Album of 2021 with their explosive 10 track record, Armageddon. So we were super keen to hear tracks from the album live. Playing a mix of songs old and new, they did not disappoint. The guitarists gave us synchronised jumping while vocalist Jake gave us butterflies with his slick vocal tone. ‘Deadbeat’ and ‘Dakota’ got the biggest response from the audience with the entire set proving their own headline worthy status.

Familiar faces filled the crowd tonight, as long-time Short Stack fans returned to the floor to see the Aussie staple act perform after holding onto their tickets since the tour was originally planned for 2020. The bright lights that once illuminated silhouettes of teased side fringes and leather jackets now lit up the trendy, well-presented rockers as they opened their set with brand new track ‘Burn You Down’. We were taken back to our emo days as the high-energy opening riff to ‘Princess’ filled the room. Screaming girls and guys alike, chanted along to every word as the energy in the room amped up to a whole new level.

A giant inflatable beach ball was tossed to the audience by one of the youngest members of the fan base, Shaun’s son, as he joined the band on stage donning his pint-sized Short Stack shirt and headphones. It was a sweet reminder of how the band and fans alike have grown up together. The atmosphere was only amplified as the boys performed more fan favourites ‘Shimmy A Go Go’ and ‘Sweet December.’

Sporting an iconic skull & crossbones Short Stack logo tattooed on his arm, drummer Bradie Webb got our hearts pumping with an epic drum solo, as the rest of the band left the stage. Upon their return, the audience went wild – we knew the night wasn’t over yet as Shaun belted out the opening line to ‘We Dance to a Different Disco’ off their iconic 2010 album; This Is Bat Country. We were transported back in time for a moment, before the trio revived us with their fresh single ‘Armageddon’.

As the stage dimmed and the night was drawing to a close, we were not willing to Goodbye once again. The sea of fans began a “one more song” chant, as Stack came Back onto the stage and Andy announced that they had not one, but two more songs planned for us. The boys surprised us with an unexpected cover of Blink 182’s ‘All The Small Things’, which for the majority of the crowd, was a quintessential part of our adolescence. We shouted every last word as the energy only intensified for the show’s closing track ‘Sway Sway Baby’.

Although the show may have lacked a bit of hairspray and eyeliner, it certainly didn’t disappoint us with the great assortment of old and new favourites to sing along to. A mix of nostalgia and excitement filled the room as we confidently made emo great again.