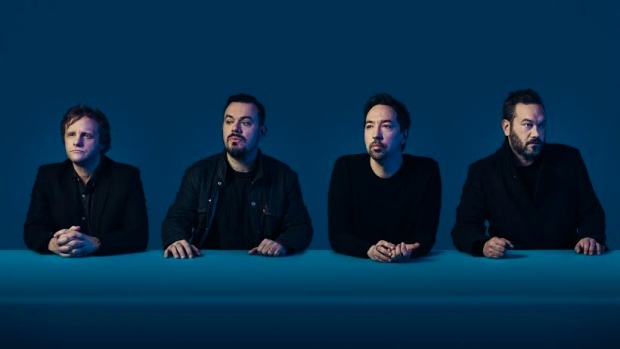 Shihad return to Australian stages this June and July for the first time since their FVEY tour in 2014, joined on the East Coast leg by Adelaide punk rock trio – Grenadiers.

In 1996 Shihad released what many consider to be their break through album; the Self Titledopus that became affectionately known as The Fish Album (in reference to the album cover image). Now in April 2016 The Fish Album is re-mastered and re-issued both digitally and on vinyl. Evolving from the semi industrial Churn (1993) through the heavy riff laden Killjoy (1995),The Fish Album bristled with a new found lightness of spirit as it collided with the maturity of a band fulfilling their potential as writers and incendiary live performers.

Finding a home with labels internationally Shihad toured The Fish Album around the globe relentlessly. Songs such as La La Land, Ghost From The Past, A Day Away and the breakthrough single Home Again burnt into the consciousness of rock fans from New Zealand to Germany where the band based themselves for a good portion of ‘96 and ‘97.

There aren’t many bands that endure with such a cache of riches while continuing to demonstrate a surging hunger to evolve and perform. After twenty-eight years together, they just keep getting better, delivering LP’s and live shows with an intensity that leaves their younger contemporaries for dead.

2015 was a break-out year for Adelaide punk rock trio Grenadiers. After the release of their second full-length album Summer things took off for the Adelaide trio. The band scored a Triple J Feature Album, toured nationally with both British India and Unwritten Law, and smashed their own high-energy headline shows nationwide. In their hometown they picked up the gong for ‘Best Group’ at the South Australian Music Awards, supported national treasures Cold Chisel, tore apart the Triple J studios on Like A Version, and were nominated for the Australian Music Prize.