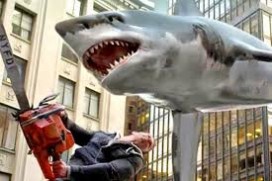 Syfy’s Sharknado is back! Ian Ziering and Tara Reid are reprising their roles of Fin and April in Sharknado 3, set to premiere in July.

Following the success of the first 2 installments, Sharknado 3 will be bringing back director Anthony C. Ferrante, scriptwriter Thunder Levin and once again, Asylum will be producing.

Syfy hopes that Sharknado 3, which is set on the Eastern seaboard, in the nations capital Washing ton D.C, will have the same impact of Sharknado 2: The Second One with the sequel bringing in 3.9 million viewers, making it the most watched original movie on the Syfy network.