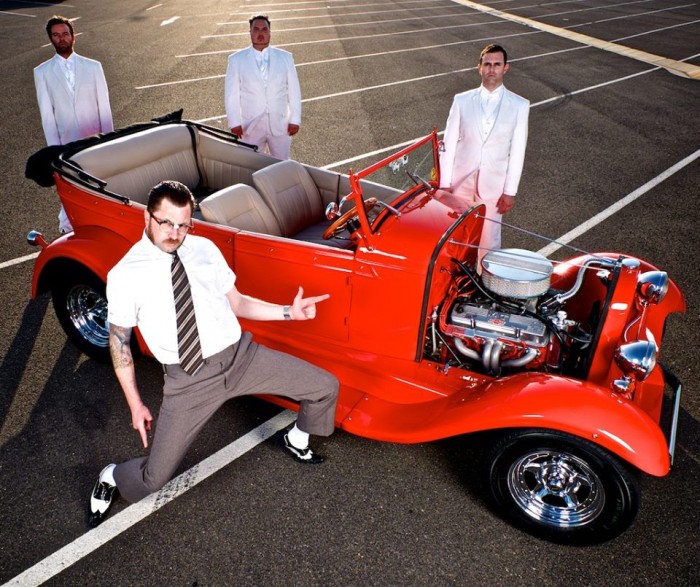 Having just finished up an East-Coast run of dates in support of their new single ‘Bruja’, Rick Dangerous and his band of cocks aren’t wasting any time getting back out on the road, this time for the main event –  the ‘Thrust Machine’ EP launch tour! To celebrate, they have posted up a new cut from “Thrust Machine”, a rousing track called “F**king Phil.”

Thrust Machine is out this Friday through MGM Distribution.

Thrust Machine, the bands second EP release, is a 7-track mini-opus, of balls-out, no-f**ks-given, heavy Rock N’ Roll. Flying the coop on April 22nd through MGM/Green, the EP release will see the band embark on their biggest Aussie headline tour to date. Their sound has been described as sexy, repulsive, abusive, and at best, obnoxious.

Rick first assembled his feathered friends back in 2014, Oscar de la Talon (guitar), Sir Gregory Peck (bass) and Feather Locklear (drums) to inappropriately suckle at the teat of the Australian music scene, and that’s exactly what they have done. Having steadily built themselves a reputation as a ‘must-see’ live act, Rick’s somewhat bizarre stage antics, coupled with a super tight live show, has garnered rave reviews from media and punters alike.

Tagging along for the ride is Byron Bay’s Rock N’ Roll machine Hammers. Taking influence from a diverse range of styles, Stoner Rock, Metal, Blues, blended with the anecdotal style of country and spat in your face with the attitude of punk rock, Hammers deliver a booze-soaked Rock N’ Roll experience that is sure to get the party started. Having shared the stage with the likes of Brant Bjork (USA), Havok (USA), King Parrot, High Tension and Gay Paris to name a few, Hammers are quickly carving themselves a name in the Aussie Rock scene landscape. Their new single ‘The Other Side’ is out now.

Do not miss Rick Dangerous & the Silkie Bantams this May/June as they thrust their way around the country in support of their new EP. (Local supports on all shows to be announced).