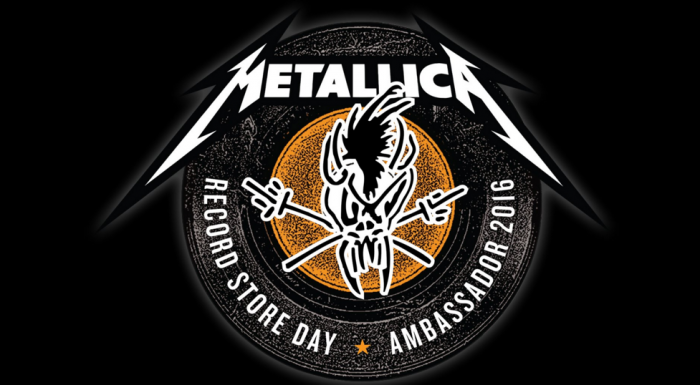 Record Store Day is thrilled to announce its Ambassador for 2016, Grammy Award-winning, Rock and Roll Hall of Fame inductees… METALLICA!

Metallica is no stranger to Record Store Day, this year set for Saturday, April 16th, a special day in support of independent record stores and record store culture worldwide, now in its ninth year.

“Independent record stores are part of Metallica’s DNA,” said drummer Lars Ulrich. “They have been pivotal in shaping each one of us into the music fanatics we’ve all become. We could not be any prouder to be Record Store Day Ambassadors for 2016 and are looking forward to screaming from every rooftop the next few months about everything independent record store and beyond.”

Throughout Record Store Day’s near-decade lifespan, Metallica’s support has been more than noteworthy with in-store appearances, (remember Mountain View, CA Rasputin Records in 2008, when the band met their fans for hours to kick off the very first Record Store Day) and a healthy handful of special releases. In fact, members James Hetfield, Lars Ulrich, Kirk Hammett and Robert Trujillo made big news just last year when the band’s cassette-issued demoscollection, No Life Til Leather, ended up as Record Store Day 2015’s highest seller. As well, Trujillo’s lauded biopic, Jaco, about legendary bassist Jaco Pastorius, was RSD 2014’s Official Film and a special Record Store Day exclusive version was released on DVD for Black Friday 2015, including a bonus CD featuring tracks from Trujillo himself.

This year the band’s official release will fit into a wider theme of Record Store Day 2016, highlighting the relationship between US record stores and their French counterparts, between Record Store Day and ‘Disquaire Day’, between music-loving humans in the US and France, following the tragic events in Paris in November 2015. Metallica will release Liberté, Egalité, Fraternité, Metallica! – Live at Le Bataclan. Paris, France – June 11th, 2003, a CD featuring a live recording from the club, with the band, Record Store Day and independent record stores donating proceeds to benefit Fondation de France’s Give For France charity (details here)

For now, let’s all get ready for another great Saturday in April, when we celebrate the culture of the independent record store with Metallica.

FOR THE FULL AMBASSADOR STATEMENT AND VIDEO CHECK OUT THE NEWLY RELAUNCHED WWW.RECORDSTOREDAY.COM