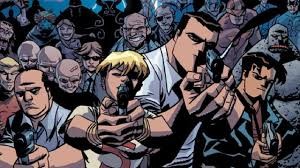 The announcement was made by Brian Bendis, creator of the Powers comic books which the series will be set. Bendis will also serve as executive producer.

The first 3 episodes of the 10 episode series will be available March 10th, followed by one new episode every Tuesday.

The first episode will be available for free for everyone on Playstation.com/Powers and the following episodes will be for Playstation Plus members for free.