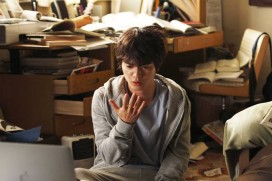 Madman Entertainment is very excited to announce that PARASYTE: PART 1 will screen across the country, for one day only, as a special theatrical event on April 26th, 2015.

PARASYTE: PART 1 tells the story of Shinichi Izumi, an ordinary high school student who is attacked by an alien parasite – a mysterious worm-like creature which penetrates the ears or nose of an ordinary human, attaching itself to the brain and eventually taking over the entire body. Whilst Shinichi is able to fight off the parasite before it reached his brain, it remains within his right hand.

Shinichi Izumi and the parasite now live as one. They both come to understand that if one dies, then so will the other. In a bid to survive, they join forces to fight against the threat of other parasites.

Based on the worldwide best-selling manga, PARASYTE: PART 1 opened on November 29, 2014 in Japan and became a huge hit – topping the opening weekend box office charts and taking in $2.9 million. It is directed by acclaimed filmmaker and visual effects master, Takashi Yamazaki (THE ETERNAL ZERO, ALWAYS SUNSET ON THIRD STREET, SPACE BATTLESHIP YAMATO).

For one day only, fans will be able to see this Japanese sci-fi/horror blockbuster in cinemas across the country on April 26, 2015.

Locations and on-sale dates for tickets will be confirmed in the near future.