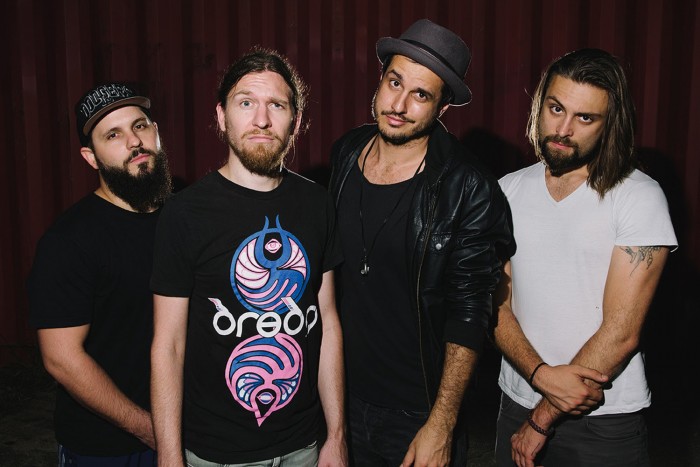 Brisbane’s force of funk-groove-prog nature, Osaka Punch, have signed on the dotted line with Sydney’s Birds Robe Records – a match made in quirky-prog heaven. This awesome union of souls has been bubbling away in the background since Osaka Punch’s return from the UK in late 2015… and now they are celebrating the signing by re-releasing Osaka Punch’s Voodoo Love Machine album on May 30th.

For those who came in late… The re-release of Voodoo Love Machine comes out of the fact that the Osaka Punch lads recorded the album, did one show in Brisbane as Osaka Punch (previously known as Kidney Thieves) and then left for the UK on a new adventure to tour and record there. Therefore it never really had it’s chance to have a proper release – aside from those lucky enough to be at that first show or shows since, it has been a relatively hard to come by product.

The Re-Release of the album will put it into stores like JB Hi-Fi for the first time and make it available again in it’s original format – a Digipak with a 6 page booklet – as well as back into all digital outlets, alongside 2016 single Stonk – which has been waving the flag for the band since their return, getting love on triple j and Triple M, as well as community radio all over the country and turning heads on their tour in February and March.

Frontman Jack Muzak is bouncing off the walls about the announcement. “We are totally stoked to be on the Birds Robe roster – Mike is such a legend and the other artists on the label are friends and heroes of ours. It feels like the natural fit and home for our music.”

Label head Mike Solo is positive about the future of Osaka Punch. “I’m super excited to welcome Osaka Punch to the Bird’s Robe family. To be honest, they have felt like family for some time now. After a long time hearing about their much-fabled live shows, the first time I saw these guys play they were a rare band who lived up to the hype. It was like someone had put together everything that is fun about music and assembled a band in front of me. If it’s sounds like I’m gushing, it’s because I am. Their quirky brand of funk-prog is brilliant and as anyone who knows me will attest, I’m forever lamenting the fact there isn’t more music like this around. But with Osaka Punch bringing the goods back home, we’re in good shape. Stay tuned for new music, new tours and new reasons to fall in love with this band all over again.“