Y’all ready for this? Secret Sounds are buzzing to announce that YEARS & YEARS, LIDO, MOONBASE COMMANDER and TWINSY will have you dancing on the ceiling at The Triffid onThursday 21 July, at the official Splendour In The Grass Pre-Party (Brisbane Edition)! Get amongst what is set to be the party of the year featuring a bunch of Splendour 2016’s finest!

As tradition, the Byron Bay pre-party will be kicking off on Thursday July 21st at the Northern in Byron Bay, the line up for that will be announced in the coming weeks… stay tuned to secretsoundstouring.com and make sure you sign up to their mailing list for further details.

For all details on official Splendour in The Grass sideshows go to secretsoundstouring.com

2015 saw Years & Years rise to the very top of British pop music with their popular #1 single‘King’ and their debut album Communion peaking high on the UK and Australian charts and selling over a million copies across the globe. What’s more, the band also took out the BBC Sound of 2015 award, and recently played their largest headline show to date; a sold out show at Wembley… a pinnacle moment for what is surely the UK’s and the world’s favourite new band! We welcome Years & Years back after their out-of-this-world SITG ‘15 set, which also saw the band selling out both their sideshows in Sydney and Melbourne after both venues were upgraded. If you’re not making it to Splendour this year, the Brisbane official pre party is the only chance you’ll have to see Years & Years bring the house down outside of the festival… So what are you waiting for?!

We’ll see you on the dance-floor, Brisbane! 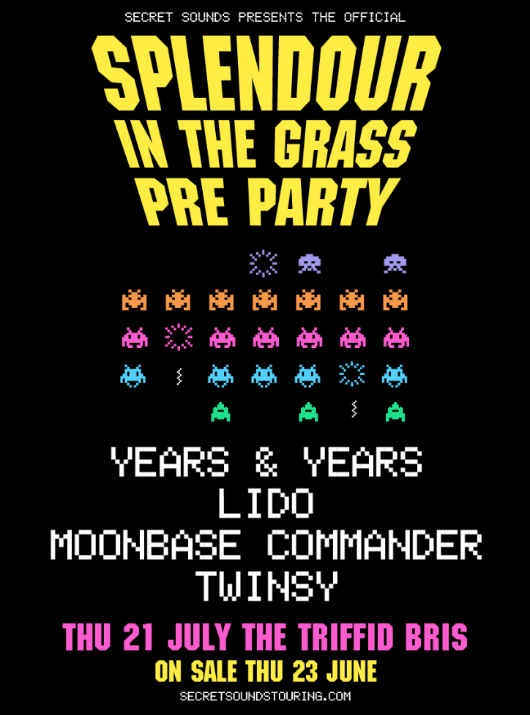