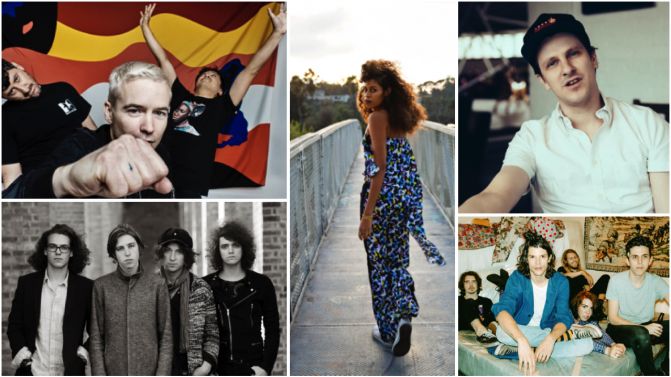 With Lorne and Byron Bay Falls Festivals selling out in record time, and Marion Bay and Fremantle festivals not too far behind, Secret Sounds Touring are gifting us with a slew of Official Falls Festival headline sideshows for some of the festival’s biggest acts, including The Avalanches, Grouplove, Jamie T and Aluna George. Start your 2017 right; sign up to the Secret Sounds mailing list now for exclusive access to pre-sale tickets!

The Avalanches
Supported by The Music

Melbourne electro pioneers The Avalanches will be making their highly anticipated comeback this January, with headline shows in Sydney, Melbourne and Adelaide for the first time in over a decade! If their Splendour in the Grass 2016 and pre-party performances are anything to go by, with a live show that effortlessly combines both albums, guest musicians like Jonathon Donahue from Mercury Rev and Spank Rock, not to mention a few other surprises, these shows are the perfect way to start your 2017!

In the two years since pop alchemists AlunaGeorge – aka singer and lyricist Aluna Francis and producer George Reid – released their critically praised debut album, Body Music, they’ve barely stopped. From world tours to festivals, to Katy Perry support slots, collaborations (2015’s ‘To Ü’with Skrillex & Diplo) and chart-slaying remixes (DJ Snake’s version of ‘You Know You Like It’– one of the most streamed songs of all time), their world has expanded immeasurably from the tiny London studio they started working in back in 2010.

Grouplove are one of Australia’s favourite indie-pop outfits. Fact. After selling out all three headline shows and consistently delivering an infectiously energetic live show in Sydney and Melbourne earlier this year, the band’s name couldn’t be more fitting.

Supporting Grouplove in Sydney is Josh Carter and Sarah Barthel, who make up New York electronic rock duo Phantogram. Coming together in 2007, Phantogram’s music incorporates psychedelic pop vocals, J Dilla-style hip-hop beats, and shoegazing sensibility. The duo have two full length albums under their belt and recently paired up with Big Boi from Outkast, to form super group Big Grams, which produced “Fell In The Sun, one of 2015’s stand out tracks. Phantogram are back this year with their brand new album Three ready to drop in October, in a recent interview with Pitchfork, Barthel described the album as ‘a lot more fucking bombastic and heavy’.The band’s latest anthem ‘You Don’t Get Me High Anymore’ is currently on high rotation on triple j and getting us set for summer!

Jamie T, a five-time NME award winner, has established himself as one of the UK’s most unique songwriters, merging his punk, folk, ska and reggae influences. He has released four critically acclaimed albums to date which have all charted top 5 in the UK.  His 2007 debut Panic Prevention earned him a Mercury Music Prize nomination, and his follow up 2009’s Kings & Queens shot to No 2 in the UK chart.  After a five-year hiatus, Jamie returned in 2014 with Carry On The Grudge, which was hailed by Sunday Times Culture as ‘a third album of such unanswerable brilliance’.

Following on from a stellar set at Splendour in the Grass in 2015 and massive stadium shows with BLUR, Jamie T will return to Australia in 2017 to play headline shows alongside his Falls Festival appearance. The shows will support his recently released fourth album Trick.