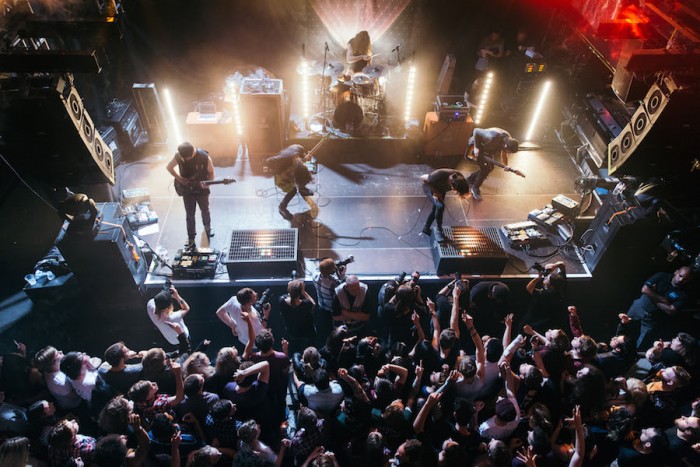 Northlane  won at the 2015 ARIA Awards last night. The band  now have an ARIA award for Best Hard Rock/Heavy Metal Album to the ever-growing list of accolades for their latest album, Node.
“Winning an ARIA award is something that always felt out of reach from a heavier band like us. Our new record Node saw us take a lot of risks, and it’s very exciting for us to find out that people are recognising these changes in such a flattering way. This record was a very difficult one for us and was born from a pretty tough and testing time, when we felt our career was hanging in the balance. Thank you to everyone who helped make this happen – it’s an amazing result after the rollercoaster ride that has been the last 18 months.” – Northlane
Node was revered by media around the world and the admiration echoed in Australia with a #1 ARIA chart debut, feature album on triple j, a guest host on iconic ABC television program Rage and twoBlunt Magazine covers. The album and subsequent Australian tour was the culmination of a well-documented transformation for the band. Against all the odds, they discovered a vocalist that personified their ability and passion to take them to the next level. Bridge’s addition to the band not only reinvigorated everyone involved, but finally allowed them to create an album that they had long aspired to make.
Earlier this month, Northlane wrapped up their first Australian headline tour since releasing Node. With sold out shows in Melbourne, Brisbane and Sydney, the tour showcased the incredible talent of new frontman Marcus Bridge to Australian fans for the first time outside of their Unify 2015 headline performance in January. Straight after, the band headed over to the USA for a headline run with Volumes. When they get return, Northlane will kick off 2016 with an extensive regional tour as well as a headline slot on HyperFest in Western Australia.
Last month, Northlane put their own spin on the Tame Impala hit, ‘Let It Happen’, recorded on the road during their European headline tour in September/October. That same tour, the band sold out four shows in the UK, Paris and Germany and recorded a live set at the legendary BBC Maida Vale Studios. The studios are famous for the John Peel Sessions, which has seen live recordings by The Beatles, Led Zeppelin, Jimi Hendrix and David Bowie.

Check out the video for latest single ‘Impulse’ below.