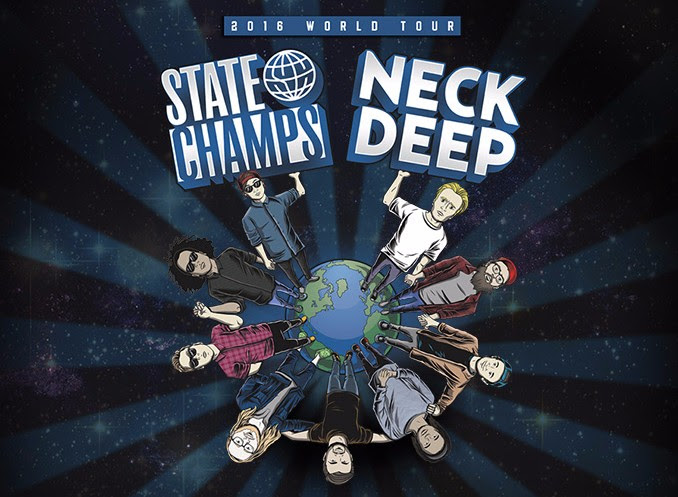 Bidding a welcome return to our shores, pop punk bands NECK DEEP and STATE CHAMPS are teaming up to head down under for a blistering national tour this January.

Reminiscent of their 2014 co-headline tour, Neck Deep (UK) and State Champs (USA) will play shows around the country, including all ages shows in Perth, Adelaide, Melbourne, Sydney and Brisbane. The dates are part of a larger world tour the two breakthrough artists are embarking on together, which also includes Japan, UK and more to be announced.

Nominated by Alternative Press as a 2015 Breakthrough Band and winners of the 2014 Kerrang Award for Best British Newcomer, NECK DEEP have spent 18 months on the road (including two full stints on the Vans Warped Tour) in support of their debut album, Wishful Thinking.

In August of 2015, the band released their critically acclaimed sophomore album Life’s Not Out To Get You. Heralded by Kerrang magazine as a “future classic”, the album charted top 30 in the ARIA Chart and top 10 in UK and USA, selling 40,000 copies during its first month on sale.

STATE CHAMPS – recent visitors as special guests on 5 Seconds of Summer’s massive, sold-out arena tour earlier this year – are gearing up for the release of their sophomore record, Around the World and Back on October 16 via Pure Noise Records/Sony Music Australia.

Keeping in fashion with their previous releases, the EP Overslept (2012) and The Finer Things (2013), the band continues to play captivating and addictive pop rock, making them impossible to ignore.

The Finer Things, featuring single ‘Elevated’, debuted at #2 on the Billboard Heatseekers chart, selling more than 3,100 copies in the first week of release.

Offering an original take on the nostalgic sound of those influential 2000s bands, State Champs now has a new generation of pop rock supporters that are only growing larger every day.