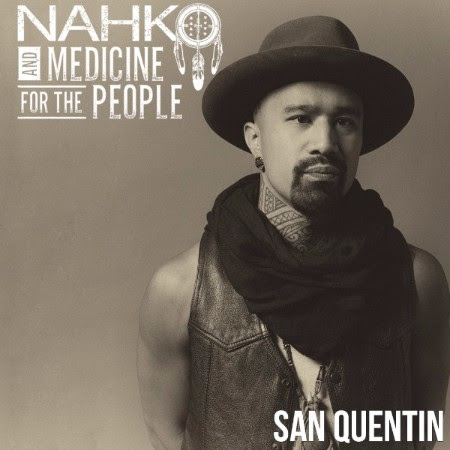 The moving video for HOKA’s first single is about Nahko’s personal journey to forgiveness that took him to San Quentin State Prison (California) to visit the man that murdered his father.

“I didn’t really know what I was going to say to him,” Nahko explains, but as he sings, he’s “come a long way to tell you this story – there’s no turning back now.” Nahko ventured on the visit so he could get some closure after spending the majority of his life unraveling the truth of his childhood. It was important to him to forgive the man that murdered his father in person. Both the video and song are more uplifting than one would expect given the subject matter, but that is just a reflection on Nahko’s outlook on life.

It’s been three years since Los Angeles, California-based Nahko and Medicine for The People’s last record, Dark As Night. That release reached No. 4 on Billboard’s Top Alternative New Album, No. 6 on the Heatseekers album chart, No. 36 on the Top Independent Album chart, and No. 7 in Australia on Triple J’s Top 10 Roots Albums of 2013. Nahko and Medicine for The People – which also features Chase Makai (lead guitar), Justin Chittams (drums), Pato (bass and kora), Tim Snider (violin) and Max Ribner (horns) – gathered more members of their global tribe of like-minded fans as they spread their powerful and impactful musical message around the world. They have toured with such acts as The Avett Brothers, Michael Franti, Xavier Rudd, SOJA, and Trevor Hall, and performed on festivals including Outside Lands, Electric Forest, Wanderlust, Bumbershoot, California Roots Music Festival, Byron Bay Blues & Roots Festival, and many more.