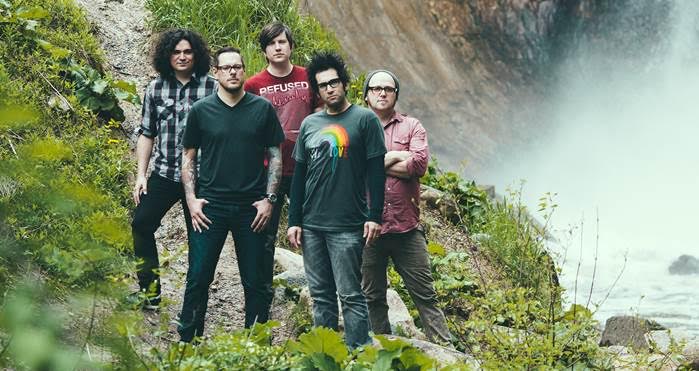 Motion City Soundtrack have announced details for their sixth studio album, Panic Stations, to be released on September 18 via Epitaph.

While on tour in the summer of 2013, Justin Pierre (vocals), Josh Cain (guitar), Jesse Johnson (keyboard), Matt Taylor (bass), Claudio Rivera (drums) began to write new material, initially for fun until eventually they found themselves with a collection of new songs. There was no preconceived vision or theme to the process, just the underlying goal to create music the band enjoyed playing together in one room. To help capture that energy, Panic Stations was recorded live in June of 2014 and was produced by John Agnello at Seedy Underbelly North (formerly known as Pachyderm Studios) in Cannon Falls, Minnesota. The band loved Agnello’s prior work in producing and/or mixing albums by Dinosaur Jr., Jawbox, Sonic Youth and recently Kurt Vile and The Hold Steady.

Panic Stations, was named after nautical structures that act as warning posts in the oceans. Many of the songs reference water and the ocean, and there is an overarching idea of letting go and not being immobilized by your own thoughts. Pierre drew on an array of literary influences with song lyrics inspired by Extremely Loud and Incredibly Close and A Million Little Pieces. The process of creating these new songs, which open a new chapter in the band’s storied career, was based on instinct and openness, a methodology that resulted in a buoyant, impassioned record. And the feeling of their renewed pleasure for the craft resonates through each note and lyric, leaving the listener as inspired as they sound.

Motion City Soundtrack has announced plans for a Commit This To Memory 10-year anniversary tour. The band will perform their celebrated 2005 Mark Hoppus produced sophomore record in its entirety as well as, a selection of songs from their impressive sixteen-year five-album career. Commit This To Memory is the band’s highest selling and most streamed album to date and features the hit songs “Everything Is Alright” and “Hold Me Down”.